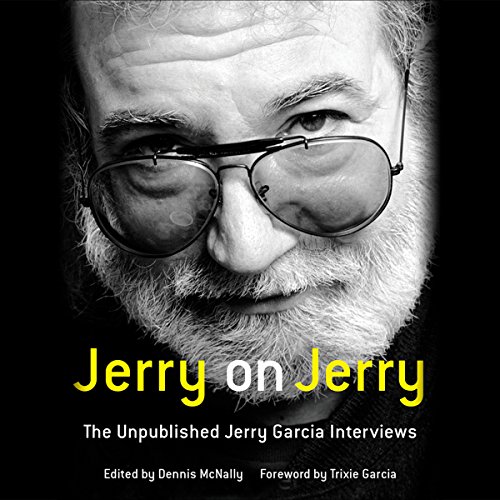 These never-before-published interviews with Jerry Garcia reveal his thoughts on religion, politics, his personal life, and his creative process. Jerry on Jerry provides new insight into the beloved frontman of the Grateful Dead in time for the 50th Anniversary of the band. Released by the Jerry Garcia family and made available to the public for the first time, these are some of the most candid, intimate interviews with Jerry Garcia ever published. Here, Garcia speaks openly about everything from growing up in the San Francisco Bay Area and his first encounters with early R&B to his thoughts on songwriting, LSD, the Beats and Neal Cassady, government, movies, and more. Illustrated with family photographs, ephemera, and Jerry's artwork, Jerry on Jerry presents uniquely poignant, unguarded, and astute moments, showing a side of Jerry that even his biggest fans have not known.

What listeners say about Jerry on Jerry

JG dominates the rap, jack, with much new to give

What made the experience of listening to Jerry on Jerry the most enjoyable?

The nuance. When interviewers ask question from a fan's point of view, you get stock answers. McNally does a great job of digging into the next level of detail of what makes Jerry tick.

I also enjoyed the laid back nature of the conversations. Jerry didn't talk as if the bright spotlight was shining on him. He was rapping with a friend and telling stories.

Most interesting is that you get a sense for how Jerry thinks and not just what he thinks. Context matters in Jerry's world and it's very clear that the correlations between his influences and his art are strong.

Least interesting is the level of dissection on the topic of movies. It went a bit too deep at some points, leaving me (as a 41 year old) lost in a sea of old time character references.

This was probably the one spot that I really wanted improved. I really wanted to listen to this all at once - and I had the opportunity - but I felt like it slogged along at times, giving me an opportunity to switch my attention to something else more easily.

I did want to listen in one sitting, but did not do so. The cognitive load on this was a bit higher than I thought it might be. Garcia is a fascinating person and his music lights up the best parts of my brain, but you have to really focus on what he saying.

I love reading McNally. And Trixie is, by all accounts, and incredible woman. I gave an extra star for this book because it didn't yet exist but now it does. We get to hear Jerry's words on random topics. We get a deeper peek into him as a person. Thank you to Dennis and Trixie for making this happen.

It's Just Jerry Being Jerry

This Audiobook was an absolute no brainer to me. I am a huge Grateful Dead fan and have always found that Jerry Garcia was so much more than just a musician. The only downside to this is that the audiobook is only 5+ hours, in some cases I find it annoying to spend a credit on short books. This is such amazing material that the 5 hours flies by and it is just a fleeting feeling knowing it's going to end.
I especially love listening to Garcia just go off into different subjects, he is so relatable and is maybe the most down to Earth celebrity who actually talks to people not down to people. He doesn't act above any topic. I started listening to the Grateful Dead 10 years after Jerry Garcia died and I still feel a connection to him and understand what the man was about.
10/10 I would love if they release more of these interviews or any type of Grateful Dead Audio books. Thank you to his family for letting his fans be included to this Grate book.

This is an absolute must listen for anyone who is interested in Jerry Garcia or the history of the Dead. I am not sure whether the book is available in print but I highly recommend you listen to these interviews.

Some things are left out for a reason.

Love Jerry, but like everyone, not everything that fell out of his mouth is amazing. This is an example of well deserved take outs. Left me bored and waiting for it to either get better, or end.

Recorded dialogues of Jerry himself, what else do you need to know?! Loved it.

if you are a dead head you'll dig it

some things drag a bit. I wish there was more content about song writing etc. but still very cool to go in the mind of Jerry and listen to his discussions.

A+ to every feature of this book! Absolutely loved it! To hear Jerry tell all these stories gives me a nice cozy and warm feeling. He is quite closely my favorite musician that ever lived.

When you miss someone’s voice and get to hear it again after many years. What a gift this book was!!