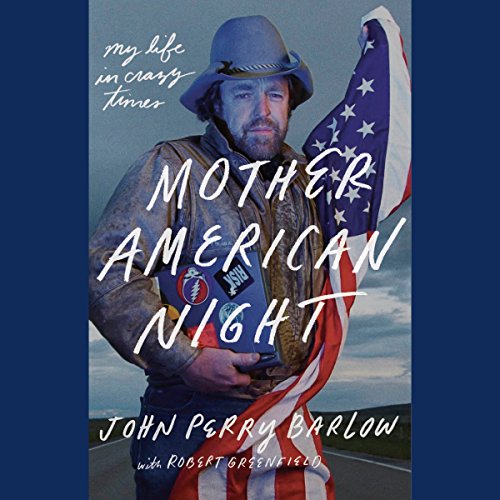 John Perry Barlow’s wild ride with the Grateful Dead was just part of a Zelig-like life that took him from a childhood as ranching royalty in Wyoming to membership in the Internet Hall of Fame as a digital free speech advocate.

Mother American Night is the wild, funny, heartbreaking, and often unbelievable (yet completely true) story of an American icon. Born into a powerful Wyoming political family, John Perry Barlow wrote the lyrics for thirty Grateful Dead songs while also running his family’s cattle ranch. He hung out in Andy Warhol’s Factory, went on a date with the Dalai Lama’s sister, and accidentally shot Bob Weir in the face on the eve of his own wedding. As a favor to Jacqueline Kennedy Onassis, Barlow mentored a young JFK Jr., and the two then became lifelong friends. Despite being a freely self-confessed acidhead, he served as Dick Cheney’s campaign manager during Cheney’s first run for Congress. And after befriending a legendary early group of computer hackers known as the Legion of Doom, Barlow became a renowned Internet guru who then co-founded the groundbreaking Electronic Frontier Foundation.

His résumé only hints of the richness of a life lived on the edge. Blessed with an incredible sense of humor and a unique voice, Barlow was a born storyteller in the tradition of Mark Twain and Will Rogers. Through intimate portraits of friends and acquaintances from Bob Weir and Jerry Garcia to Timothy Leary and Steve Jobs, Mother American Night traces the generational passage by which the counterculture became the culture, and it shows why learning to accept love may be the hardest thing we ever ask of ourselves.

"Wondrous tales of the hippie highway by Grateful Dead lyricist and internet pioneer Barlow. The author died recently after a long series of illnesses that form a moody counterpoint to the general anarchist fun of his memoir. That may be a good thing considering that the statute of limitations may not yet have run out for various of the hijinks he recounts here...[Barlow] writes with rough grace and considerable poetic power...[Mother American Night] is a yarn to read, with pleasure, alongside Ringolevio and The Electric Kool-Aid Acid Test." (Kirkus Reviews)

"Breezy, connected by ceaselessly mind-blowing anecdotes, and bubbling over with psychedelic wisdom, Mother American Night will become the crucial document for understanding the life and work of the internet pioneer and Dead collaborator. The fun is infectious..." (Wired)

"The first thing I noticed in reading Mother American Night was Barlow's voice...his incredible gift of language, combined with his habit of manicuring his anecdotes to carefully calculated rough-hewn perfection, shining through with unmistakable glory. Barlow is one of the world's greatest storytellers... This is an essential, beautifully written book that is full of humor and tragedy and revelation." (Cory Doctorow, Boing Boing)

Not what I was Expecting..but...

I originally wanted to read this book because Barlow was one of the Grateful Dead lyricists and I love the Dead. The book did not fail to deliver on his experience working with the Dead, but it became so much more interesting because of all Barlow did in his life in addition to his work with the Grateful Dead. I would highly recommend this book to anyone interested in the Dead,the Internet, Politics, and Love gained and lost. In short I loved it!

Great Reading from a Visionary

I met Barlow at his ranch in 1969. Visiting him and riding dirt bikes were several members of the Gratetful Dead. We were all hanging out in his barn and I had no idea who his pals were until several years later when we would meet again, this time while I was working stage crew at a Dead show in Boulder. Our paths would cross several times again over the decades, the last time in Tuscon where we were celebrating a life at a wake, eating scrambled eggs at 2 am. He was an amazing person who accomplished so much in a life this book chronicles exceptionally well.

amazing book on a amazing person.

This was a great listen. I listened to it 'cause I'm a Dead Head. But learned so much more of what a crazy and amazing man this guy was. Listening to it makes me wish I could've met the man. What a life he led. From Dead lyrics, to ranching, to cyber space, to politics.... To Love. John Perry Barlow was a amazing human being.

As I said, Barlow is a Self Righteous Tool!

So much of it comes off like bragging and over inflates his importance. For instance, have a look at Steve Jobs book and note Barlow doesn't get mentioned...

Most telling is the lack of interaction with Garcia and the Grateful Dead crew who did not suffer fools lightly! Heck they treated Weir like a kid brother so Barlow was little brothers buddy!

Sure he's an interesting character to be sure! Wrote a few good lyrics but few classics.

His little "adventure" with McIntyre (You Dead Heads should have a bit of back story to fill the blanks!) kinda set the tone for me.

Barlow, as I said up front is self righteous and is the epitome of relativistic America where one needs only to justify one's actions to get some sleep. He's not the train wreck so many of his generation were but not far from it!

Before you start dismissing me as a right winger conservative make a mental list of the casualties from the 60's and put the waste of Garcia on top! Finest musician of the century traded it for dragons breathe!

All that said it's a fun listen and remains in my library! I don't have to agree with the protagonist and can appreciate the wild ride of a story and the perspective it provides.

Ray Porter knocks it out of the park as usual!

John Perry Barlow has had the opportunity to do what we wished we could have done as baby boomers. He was involved in so many aspects of things going on in our lifetime that it is mind boggling. If he had just worked with the Dead we would have been impressed but he was involved in so much more. Kudos to Bob Greenfield for writing the stories that he spoke to Barlow about. His other works have distinguished him as a talent for bringing out what is amazing about his subjects.

I had the pleasure of knowing JPB, we weren’t best friends or anything, but we knew each other, and hung out on more than a few occasions. These are some of the stories he told me when were hanging out. JPB was one of the most interesting human beings to walk the earth, take the time to listen to his story, it’s a good one. ✌🏻❤️

What a life he had... great book

impeccivly read, not only a great insight 8nto Barlow's life inside and outside the GD....but alsoa great philosophical read.

Great story about an amazing life. He seemed to be right on the pulse of things no matter where he was. RIP John.