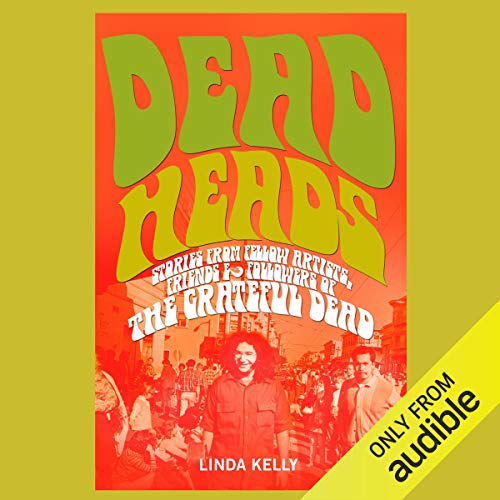 By: Linda Kelly
Narrated by: Gwen Hughes,Jamie Renell
Try for $0.00

Just what was it about the Grateful Dead that made them rock and roll's most beloved band? In Deadheads, those with the real story, who were there and are still listening to the music, explain it all. Grateful Dead lyricist John Perry Barlow talks about his lifelong friendship with Dead guitarist Bob Weir. Cajun chef Rick Begneaud shares his memories of feeding the Dead. John Popper of Blues Traveler recalls playing with the Dead at Bill Graham's memorial tribute while publicist Dennis McNally shares some wild adventures of working with the band for more than 30 years.

Author Linda Kelly recalls being dragged to her very first Dead show, hanging with Jerry in New York City, and more. First-show revelations; backstage adventures; parking lot hoopla; how-to-live-life philosophies; strange, tangential experiences stemming from being in that certain place at that certain time - these intriguing anecdotes evoke wonderful images, lots of smiles, and a close look into a fascinating phenomenon in the history of music. This 20th-anniversary edition of Deadheads celebrates 50 years of music and includes the best stories from the original 1995 edition and two new chapters as well as new interviews with various friends, artists, and followers of the Grateful Dead.

"One of the best books on the Grateful Dead." ( Rolling Stone)

What listeners say about Deadheads

Great short stories and tales helping to remind one of how it was and is to be a Dead Head. This will get replayed many times.

Excellent book for real DEAD HEADS to read.as it h

true stories of actual friends and co workers JERRY GARCIA HAD IN HIS WONDERFUL LIFE.
This book listening from Audio and given to me the book.
THANK YOU AUDIBLE. I JOINED ❤️

A Must Have For Any Deadhead

In many ways, this work is reminiscent of Greenfield’s book on Jerry, but with the wider spectrum of it being the whole Grateful Dead. Nothing you wouldn’t enjoy with some Dead playing.