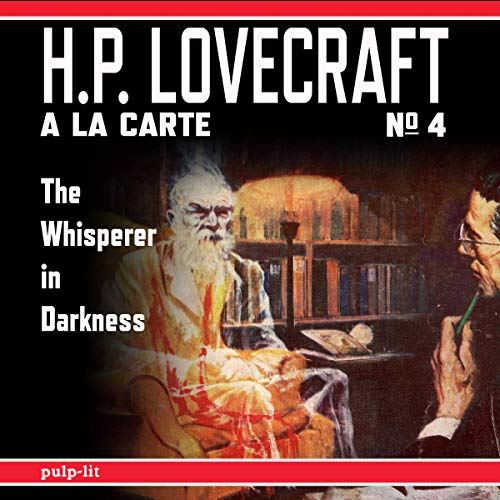 The Whisperer in Darkness

This is the same reading of The Whisperer in Darkness that you'll find in Pulp-Lit Productions' 82-hour flagship omnibus collection, The Complete Weird-Fiction Works of H.P. Lovecraft. We've packaged it as an individual file for listeners who just want this story, to save them the expense of buying the whole collection and the trouble of sifting through hundreds of titles.

This deeply unsettling cosmic-horror story blurs the line between and among weird fiction, dark fantasy, and science fiction, and arguably makes better use of its scholarly-but-a-little-thick professorial narrator to evoke subtextual horror than any previous work.

By the time he was writing this story, Lovecraft was acutely aware that he and his primary literary outlet - Weird Tales - were not exactly a match made in Valhalla. They had different literary goals in mind when approaching any given story. Weird Tales liked fairly conventional shudder-pulp tales, especially ones that delivered a big finish; and Lovecraft had learned by experience that if he let his writing get too subtle and sophisticated, it would be shot right back to him with an apologetic note from editor Farnsworth Wright.

The Whisperer in Darkness may have been his attempt to bridge these two worlds. It features plenty of pulpy action, to the point of getting roundly criticized by some Lovecraft fans for borrowing too much from writers like Robert E. Howard. And it does have that oft-parodied “final crowning horror” line, the last piece of evidence withheld until the very last sentence that reveals The Horrid Truth; but it is voiced by Professor Wilmarth, and for a careful listener (who has figured out the truth already, long since), it functions not so much as a crowning horror, but as a line that rings true to a character who we know really isn’t as smart as he thinks he is.

What listeners say about The Whisperer in Darkness

excellent reading of an HP classic!

Geat narration. Ookey Spookie story. Maybe I will get the collection on my next credit.