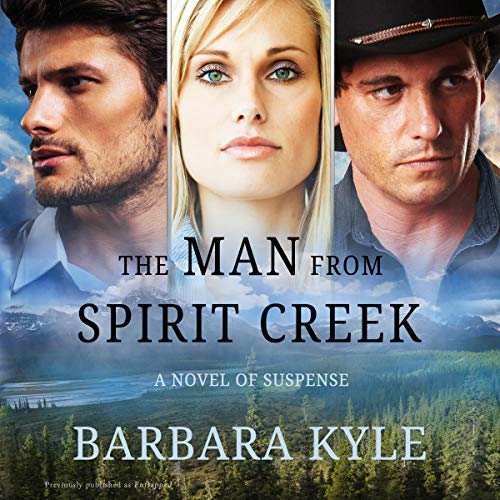 The Man From Spirit Creek

When Liv Gardner arrives in the rural town of Spirit Creek, Alberta, she has nothing but her old car and a temporary job as paralegal with the local attorney. But Liv’s down-market persona is a ruse. She is actually in-house counsel of Falcon Oil, a small oil and gas company she co-owns with her fiancé, CEO Mickey Havelock - and they are facing financial ruin.

Farmer Tom Wainwright, convinced that lethal “sour” gas killed his wife, is sabotaging Falcon’s rigs. But Wainwright is clever at hiding his tracks and the police have no evidence to charge him. With the sabotage forcing Falcon toward bankruptcy, Liv has come undercover to befriend Wainwright - and entrap him.

But Liv never dreamed she’d become torn between saving the company she and Mickey built and her feelings for the very man whose sabotage is ruining them.

On a rain-swept night, Spirit Creek is stunned when one of their own is murdered. The evidence does more than point to Tom Wainwright...it shatters Liv’s world.

What listeners say about The Man From Spirit Creek

Suspense builds when a farmer takes on big oil!

I received a free Audible copy of The Man from Spirit Creek from the author, Barbara Kyle, but that in no way influenced my review of the book.

Although I've never visited Alberta, The Man from Spirit Creek dropped me in this western Canadian province. Ms. Kyle weaves the geography and geology (oil) of this prairie land into the story so well that you can taste the dust in your mouth and smell the rotten eggs smell of “sour” gas that permeates the air around the oil and gas rigs.

This present-day story gets into the nitty-gritty of the clash between ranchers and big oil. It’s full of suspense, betrayal, revenge, family ties, the love between two sisters, and the romantic loves of both of them.

Liv Gardner is the attorney for Falcon Oil, the oil and gas company she and her fiancé, Mickey Havelock, own in Houston, Texas. Someone is sabotaging their rigs in Alberta. Liv goes to Spirit Creek, Alberta under the guise of having a temporary job with a lawyer there as she tries to figure out how to get the saboteur to give up his tactics and sell out to them.

The saboteur is sheep farmer Tom Wainwright. He blames Falcon’s “sour” gas, which is released 24/7, for his wife’s miscarriages and eventual death and for the miscarriages and deaths of many of his sheep.

Even as Liv and Mickey plan their wedding, Liv gets personally involved with Wainwright in spite of the fact that she went to Alberta to stop his efforts to ruin Falcon Oil. She discovers his human side and lets her heart overtake her good sense. There’s a murder. Wainwright is arrested. But is he the killer? And will Liv and Mickey get back together?

You’ll love all the twists and turns in this contemporary Canadian western novel of suspense. It transported me all the way to Alberta for several days. What better way to “get away” during the Covid-19 pandemic than to curl up with a very engaging book?