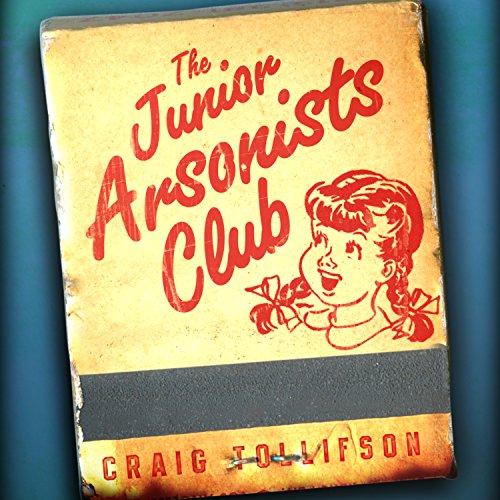 By: Craig Tollifson
Narrated by: Amy McFadden
Free with a 30-day trial

Motherhood. Pyromania. A husband's secret. Marilyn wasn't prepared for any of it.

For young parents Marilyn and Brad, adopting an orphan girl from Belgorod, Russia, was supposed to make their lives complete. But from the moment she arrives, 12-year-old Zhanna has one thing on her mind: setting fire to the family couch. At first Marilyn is determined to love the pyromania right out of her new daughter. But when Brad jets away on business - or so it seems - Marilyn is forced into a dark and hilarious game of cat-and-mouse with the preteen pyromaniac. Can Marilyn get through to Zhanna before she burns down the house - and before her own life goes down in flames?

What listeners say about The Junior Arsonists Club

A glimpse of America in every word

What did you love best about The Junior Arsonists Club?

The story was a fun little romp through an American family's adoption and the comical problems associated with their daughter. The writing was light and airy, and the story was eerily easy to apply to someone you know.

What was one of the most memorable moments of The Junior Arsonists Club?

The various attempts the adopted child has made to destroy the family couch through various forms of pyrotechnics.

N/A. I have never listed to her before.

Yes, it is a short story that's easy to digest on a long trip and will keep you interested.

If I could fault the story in one area, it would be that it does not always stay consistent in regards to locations and times. At one point in the last half of the book, our main character is talking to various people which I assume are in various places and at different times. It's hard to follow slightly, but overall doesn't detract from the story. Just a bit difficult to follow towards the end is all.

Being a mother is hard, but that's nothing new

I expected less problems and more entertainment from this story. The mother's desire for perfection could not convince me and her character remained shallow. The adoptive daughter seemed to be the most normal person. The story delivered some good laughs though, but that wasn't enough for me.
The narrator, however, was flawless.

This short novella packs a punch! I listened to it all in one sitting; a gripping story with characters that jump off the page. Loved it!

If you could sum up The Junior Arsonists Club in three words, what would they be?

The way you could empathize with the main character, both the author and the voice actress did a great job on this.Also, the uncommon characters, even if some of them could be a bit... creepy? It didnt feel like it went for cliches or was a redo of some other story.

Haven't listened to others

Who was the most memorable character of The Junior Arsonists Club and why?

Can't really decide between Marilyn and Zhana, It was easy to feel empathetic about Marilyn, but Zhana and her obsession with the couch were hard to ignore.

The title certainly makes you expect something entirely different, but it was still a quite enjoyable short story that even made me laugh out loud a couple of times. At first I expected this to be a story about Zhana and a couple of her friends creating a club to burn things or something, but i couldnt be farther from the truth.I feel that the last 15 minutes deserve a warning since the rest of the story is entirely PG13.

Finally, the couch had it coming... though it is hard to think about all the memories, both good and bad, that went with it;


*SPOILERS*
*
Still, Marilyn deserved a new begining, and there could be no better way to do so than to get rid of everything that couch meant to her.
*

The arsonist may be the sanest of them all...

Brad. Well, not so much Brad as the really effective and comedic use of Brad and his name.

Great voice work. She provided a variety of characters' voice, all distinct and interesting. It was pretty much faultless and the little audio flourishes that were added in on occasion (a particular interview comes to mind) was perfect.

Who was the most memorable character of The Junior Arsonists Club and why?

Obviously the narrator is the most memorable. We get to know her well.
But despite it being a short story many of the characters felt fleshed out and real. You know people like these. All are just a little bit crazy or neurotic. As I said, I think the title character of the arsonist may actually be the sanest despite the tendency to want to burn the couch.

Just a waring, despite the name and the cover this audiobook gets a little 'adult' at one point. It's done fairly well and highly amusingly, but it did catch me unawares.

Not what I expected, but a pleasant diversion

I came into this expecting something rather whimsical, with a literal Junior Arsonists Club. Instead I encountered an imaginatively named short family drama. It was well-written and realistic enough, and I did quite like the way the final scene drew things together.

Note: I have a strong preference for male narrators, but a woman made more sense here, since the book was written from a woman's perspective; quite to my surprise, Amy McFadden won me over after a chapter or two. That's a compliment I never expected to give!