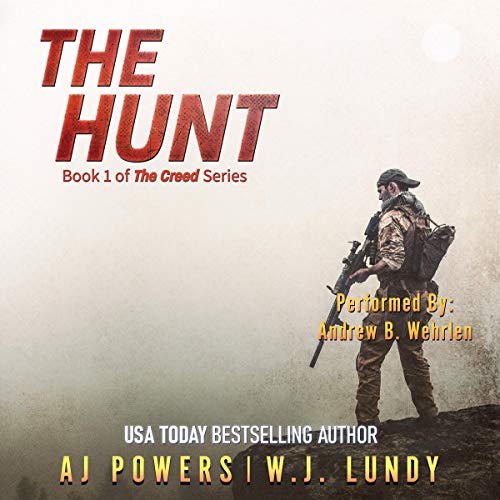 "Vengeance is mine; I will repay.” (Leo Tolstoy)

Matthew Hagan is one of the last holdouts from a society lost. Embedded deep inside Alexandria, he is an operative and vigilante-for-hire. Wherever he goes, a path of destruction follows, making him one of the most wanted men by the despotic government of the small nation-state.

As Hagan loses hope that he’ll be able to carry out his original objective, he obtains a list of names. Names of the people involved with the attack on his village, two years ago. Names that will pay for their crimes against his family.

But as he tracks down his targets, Hagan discovers that one of Alexandria’s most elite soldiers is hot on his heels, threatening his quest for retribution.

Will Hagan succeed in bringing justice to the unjust? Or, will he fall into the hands of the brutal dictatorship of Alexandria?

The hunt is on in this post-apocalyptic military thriller written by AJ Powers and W.J. Lundy.

What listeners say about The Hunt

its getting hard to find good books to listen to an you should know by now anything with a W J Lundy on it is good.