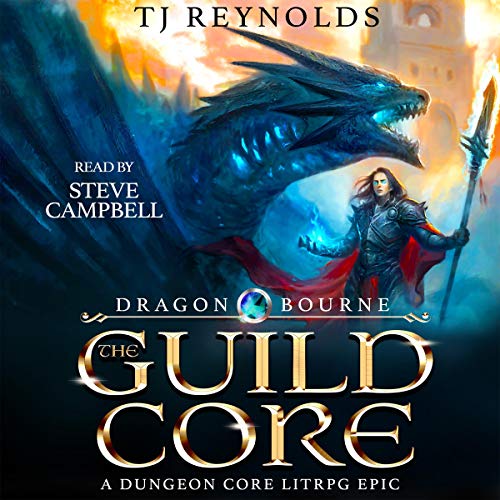 By: TJ Reynolds
Narrated by: Steve Campbell
Free with a 30-day trial

Wake a dungeon. Form a guild. Fight to restore the world.

Kai was the least likely young man to ascend. Raised on his uncle’s potato farm, he began his career as an adventurer with empty pockets and little skill. But a foolish attempt to prove his bravery leads Kai to unlock hidden power within himself and acquire a most unlikely ally.

Rhona is a battle-scarred soldier who’s as likely to toss a quip as she is to throw a punch. After setting aside a promising career in the army to pursue the Path of the Bleeding Tiger, she sets out to stop a war and seek atonement for a bloody past.

When Bancroft the Earth Core awakens, he can’t wait to clean up his dungeon and begin building things anew. A recovered item from his past reminds him that more is at stake, however, putting an end to such pleasantries.

Join The Guild Core, a small band of friends determined to restore the world to an age of dragons, heroes, and honor.

The Guild Core is a novel by TJ Reynolds, fantasy LitRPG author of Eternal Online books one to three. The Guild Core was inspired by the Divine Dungeon series, The Wheel of Time, and classic films like The Labyrinth and The Neverending Story.

What listeners say about The Guild Core 1: Dragon Bourne

I loved this book, would definitely recommend.

I really liked seeing an Mc that wasn’t just another sword user. The characters were well written and likable. The storyline was interesting and fun to follow. The narrator did a great job with the voices, especially for the dungeon.

Whoaa..I'm in the epilogue right now.... awesome.. there is usually something that I don't like about books and for this book it's that I don't have the rest of the series right now..... very well done, its actually better than the inspiration; Divine dungeon... there was a perfect balance of all the various things that make a good novel.. 1. The MC is not OP and worked for all his advancement. 2. The cultivation system is defined and makes sense. 3. All the creatures are all on the same cultivation system, so comparison is easier. 4. The world building is expanding gradually and not trying to overbuild and then you forget most places as they mention them because it was never used again. 5. Although this took inspiration from other novels I find myself liking this book much more than the original.. 6. Interaction between the various characters is so natural and unforced...You can easily relate to each of them.. I got this book for free from the author but I will be buying all the rest of the series as it comes out because its a great series, and author is such a chill dude..

This book is a lot of fun and does a great job of codifying elements while keeping things fun. I really dug it and am looking forward to more. I love all of the characters, including the strong female character who everyone would understand was both strong and female without the author repeating it again and again through every characters dialogue and thoughts. still that's a minor annoyance in an otherwise strong book.

i like the world building and lore surrounding everything, makes it seem like this is a series set to be a long one. characters are believable and likable Steve has a pleasant voice that makes this book a pleasure to relax to... every character has a unique voice and you feel like the female voices are done by a actual female

As a warning, I won this in a contest, but my opinions are my own. With all the characters throughout the Guild Core, I didn't know what to expect from the Guild Core audiobook. The story itself was a fun, unique take on a Dungeon Core, and Steve is a narrator I always enjoy. he has great rang that I've had the pleasure of listening to during Tower of Heaven. Steve does the story all the justice it deserves for both the male and female voice acting, adds a good level of spirit to an already spirited work, and just makes a good read better. If you just liked the regular book, you'll love the audio translation. The pair really hit it out of the park. I don't think there's much else ot say on the matter.

This book was absolutely wonderful! It has three main characters, but the best part is that switching between the individuals never detracts from the story. The characters themselves are extremely likeable, and all experience a lot of growth. The narrator did a good job as well. I loved this book and this author!

Dumb down story based of of better books.

First bad thing is the book is not litrpg, this book would be called a fantasy / cultivating type book. Whenever a book shows litrpg tag I often think the story takes place in a video games world or the game is intended to effect the world at large. Second bad thing is the lazy way the story is put together and is slow pace. We didn't need to know the how and why the M/C bedroom is made. it adds nothing to the story. (Its just a straw bed in cave) Ther are to many pointless things that do nothing to move the story along. This book reads like a bad RIP off of the MountainDale Press Books. the upsetting thing gets me ther is no explanation how MC repotting his owen progression in skills and abilities. How far thay need to for ascending or what ever it gets called for leveling up in the never expland system in place for ther power measurement. MC should have been a 13 year old orphan boy other then a young 18 year adult with small amount life skills development that's barely mentioned that is needed to survive. Ther are so many elements missing in the book need explanation. Examples: How are the people even developing skills and abilities. How are thay absorbing essence. Without the help gods and dungeons telling them how things work. Theirs a lot of things in this book I can go on about but wasted this much time typing is morenthen what it ever deserves. No named villain just bad people. Weak development or lazy explanation of any, or nothing at all. (like names for creature's) This is just bad book not the worst just bad.

Well thought out good building of characters that i want to know more about. I think the auther did an excellent job doing this book cannot wait for the next one.

I am looking forward to the next title in the series and I would appreciate more context of the larger world. I am excited to see what comes next.

TJ Reynolds is one of my favourite new authors within the littpg genre. a fantastic storyteller, the author has come up with a fantastic new series. bits is dungeon core, slice of life and cultivation told from several pov's. Really well written with great characters. The narrator, Steve Campbell has a good smooth delivery and tells the story well.

Good book, well performed with a story which was very enjoyable. Some litrpg elements but honestly you could write this book without and it would be just as good. Characters are good, looking for some solid development in the next novel!