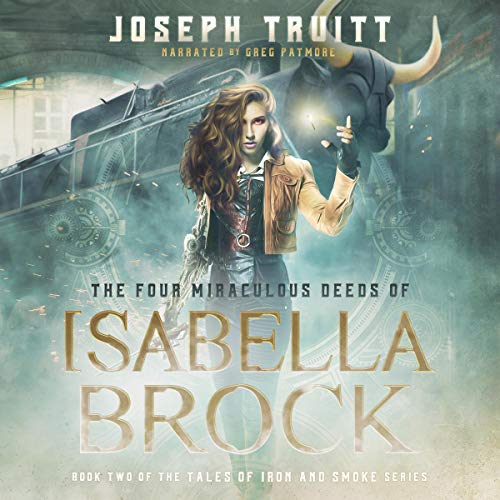 By: Joseph Truitt
Narrated by: Greg Patmore
Try for $0.00

Eddie Grand stole her arm, but Isabella Brock has a better one now.

High above the Black Mist, Grand Fortune city is cloaked in a strange Night of Darkness. Isabella and her father must escape the city before the fury of Angus Grand destroys them. When her father is mortally wounded, the young Isabella is left behind in the dangerous city with her uncle. Her life hangs in the balance as Angus Grand seeks to burn her alive, but when Isabella learns she has a brother, she resolves to both find and save him. Eddie’s act of cruelty has only served to strengthen her in preparation for the great deeds that shape her into a mighty warrior.

The Four Miraculous Deeds of Isabella Brock is a prelude to Elias Reborn and the beginning of the series, Tales of Iron and Smoke.

What listeners say about The Four Miraculous Deeds of Isabella Brock

I really liked listening to this story. The writing is well done and I enjoyed where the story twisted and turned. It’s a very creative ride and was a good length.