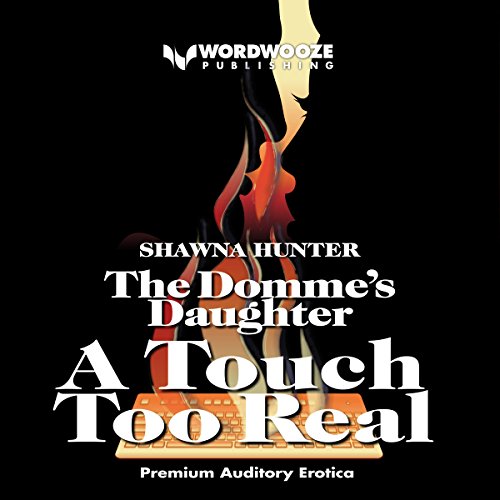 A Touch Too Real
By: Shawna Hunter
Narrated by: Sami Moss
Length: 9 hrs and 11 mins
Categories: Erotica & Sexuality, Fiction
4 out of 5 stars 4.2 (12 ratings)
This title is included in Audible Escape

Domina Brookes was never going to have a normal life. Given a dominant's title for her legal name by a man-hating domme (who happens to be both the mayor and mommy dearest), fate just seemed to be against her. All her life she's been groomed as heir apparent, but Domina has always rejected her mother's world. First, she tried to ignore it, and then, when she couldn't turn away, she tried to hide. Locking herself up tight in the house her mother gave her, Domina hasn't stepped outside in years. That, of course, doesn't sit well with Domina's mother. With an election year looming and storm clouds on the horizon, Mayor Brookes can no longer tolerate an agoraphobic anti-kink daughter who could potentially turn into a PR nightmare. So she's made it her mission to drag Domina out of her shell, kicking and screaming if necessary.

As her mother comes crashing down on Domina's safe, secluded life, all hope seems lost until a light appears in the form of Tyler, the only fan of Domina's one outlet, her blog. A romantic, empathetic stranger whose courage grows as her mother's pressure mounts, he quickly becomes Domina's knight in blue jeans. Domina's defenses slowly lower as this charming young man provides a respite from her mother's storm, but danger lurks around every corner. Can Domina let Tyler into her refuge without her mother finding out? Can the young woman's fears be overcome? And who exactly is this man who would risk everything to court the mayor's only daughter?

Arousal, anxiety, anger! It's a must-read for all!

The Domme's Daughter: A Touch Too Real by Shawna Hunter

This book is unlike any book I had ever encountered before. It led me to all sorts of emotions: arousal, anxiety, anger and even shock. I don't want to give any spoilers, but I'll try to describe what I can.

Domina Brookes is the daughter of the major of Brookes Fields. She grew up as a happy child and led a normal life all into her teenage years. It was then that she suffered a trauma that led her to shut out the outer world and become extremely agoraphobic. Her mother supplies her with a house and takes care of her needs in her life as a hermit.

One day Domina meets an online friend, Admire-her-1. She gets into a relationship with this boy, and that is when things start to change. I cannot explain more without giving too much away.

Overall it is a great book. I did not expect this ending, not in the slightest. I guessed something was up, but not this. The book led me through all the emotions I mentioned in the first paragraph. The ending was good, somewhat satisfactory, just with a slightly bitter taste.

I listened to the Audible version, and while the narrator did a great job, I did not like the fact that she seemed so old. Domina is a twenty-one-year-old girl, and this speaker sounded like she was at least thirty years older than that. She did a good job with separate voices for the different characters.

would love a sequel. the author's voice sounded like a grandma. made me kinda uncomfortable

The narrator did a great job with this story. The reason I am giving her a for is there was so minor missup in the story. The story was very different. I never expected it to take the turn that it did. It wasn't bad. It was just different.

I found this book to be entertaining, and I enjoyed listening to it. It was interesting to see Domina change and evolve as the book progressed. I did not expect the twist at the end but thought it was very well done. The narration was very good. I was given a free copy of this audiobook in exchange for my opinion.

This is good stuff, well written, and well narrated with a payoff bigtime at the end. That is all.

A twisted unexpected story of dominance.

This story begins with a reclusive and dare I say submissive woman. I loved watching her blossom from a submissive recluse into a strong dominant woman. This was truly a twisted and interesting perspective on becoming a dominant. I truly love stories of strong women.

Domina Brookes has a mother that disliked men and was a Domme and mother was also the mayor of the town. Domina didn’t want to be what her mother wanted, so she locked herself in the house and her only outlet was her blog. Thru that she met Tyler. Then her story unfolds! Don’t miss this exciting story. It has a brilliant twist! The narrator was fantastic!