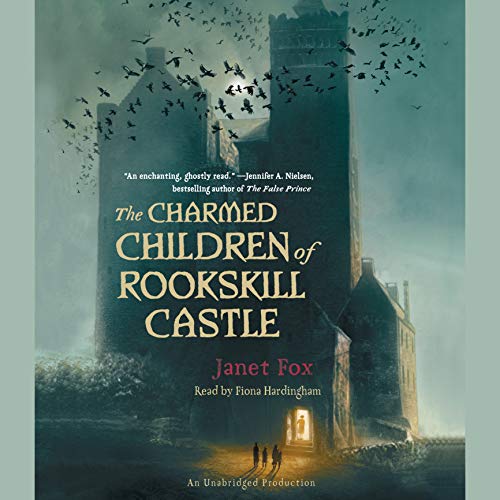 The Charmed Children of Rookskill Castle

By: Janet Fox
Narrated by: Fiona Hardingham
Try for $0.00

"Keep calm and carry on."

That's what Katherine Bateson's father told her, and that's what she's trying to do: when her father goes off to the war, when her mother sends Kat and her brother and sister away from London to escape the incessant bombing, even when the children arrive at Rookskill Castle, an ancient, crumbling manor on the misty Scottish highlands.

But it's hard to keep calm in the strange castle that seems haunted by ghosts or worse. What's making those terrifying screeches and groans at night? Why do the castle's walls seem to have a mind of their own? And why do people seem to mysteriously appear and disappear?

Kat believes she knows the answer: Lady Eleanor, who rules Rookskill Castle, is harboring a Nazi spy. But when her classmates begin to vanish, one by one, Kat must uncover the truth about what the castle actually harbors - and who Lady Eleanor really is - before it's too late.

“Wonderfully written ... Readers will curl up and keep the lights on with this chilling page-turner.” (Booklist, starred review)

“In this intricately plotted thriller .... True-to-life protagonists, the skillful interweaving of flashbacks and the chatelaine motif, a masterful final encounter, and a satisfying denouement attest to Fox’s craftsmanship.” (Publishers Weekly, starred review)

What listeners say about The Charmed Children of Rookskill Castle

Excellent for any age

A great listen. Story is very engaging and the narration was pretty much perfect. It's a dark story and doesn't talk down to it's intended age group at all, and I think it would hold the attention of anyone open to "younger" literature. Vivid visuals and likable characters. The ending is satisfying yet leaves the door wide open for more books which I hope come soon.

Did Not Want the Story to End-Loved it

If you could sum up The Charmed Children of Rookskill Castle in three words, what would they be?

I didn't expect to like this as much as I did because I am way outside the target audience with regard to age, but I loved every minute of the audiobook, and didn't want the book to end.

It has a steampunk edge that I also wasn't expecting, and was written into the story (and revealed) just enough throughout the book as to make the scare factor enjoyable but edgy.

The book ends in such a way as to be a lead into a second book, and I so hope the 2nd book comes sooner rather than later because I definitely want more.

This is hard to answer because I feel as if the book is more story driven than character driven; and was left wanting more character development on all fronts. I was especially confused about the "machinist-supernatural character". The additions and/or changes he made were also unclear . Another "character" or rather element in the story are the spells, and their understanding came too late in the book to really appreciate (so that lent some confusion to what all was taking place in earlier chapters).

What does Fiona Hardingham bring to the story that you wouldn’t experience if you just read the book?

Her voice was paired perfectly with the tone of this book and the age of the main character; and although there wasn't a significant difference between voices, it didn't take anything away from the story. She was excellent at conveying emotion and I completely enjoyed her performance.

I wonder if the issues I did have with her performance (pitch-at times was high, and differentiating characters) is more of a directing-editing issue verse performance issue.

I listened to this and it an interesting story. It's about some kids who are moved to a private academy to get them away from the horrors of WW2. Interesting characters, a nice mystery and sinister magic to boot! Im hoping there's a sequel because I think theres an opportunity for one.

But my favorite part was listening to the narrator Fiona Hardingham! Ms Fiona was so enchanting as she told this story. Her crisp, soft accent wove a spell over me and i just loved it! (I must admit to listening to this 3 times). Come to find out shes won awards for her voicework.

The book went on a couple of chapters longer than it needed to, but that doesn't hurt it too badly. Give it a listen! I think most will be pleased. 😊

This book never failed to bring me joy, right up to the very end. And it was a refreshing take on magic that I've never experienced before.

I enjoyed the book. It was well written with characters you care about. Good for young readers.

Would you try another book from Janet Fox and/or Fiona Hardingham?

it's a quick read

Which character – as performed by Fiona Hardingham – was your favorite?

the characters were not developed enough for me to choose

the book reminded me of the harry Potter books.