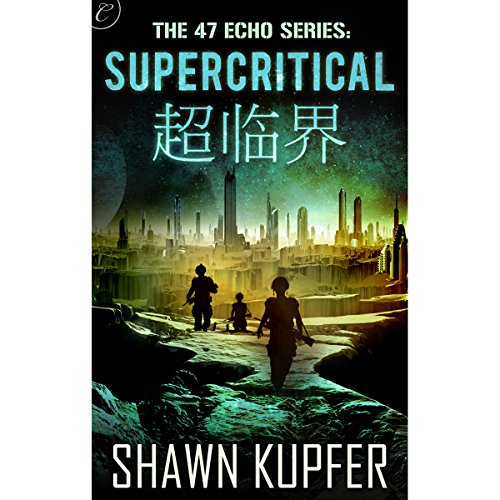 By: Shawn Kupfer
Narrated by: Victor Bevine
Try for $0.00

As global tensions escalate, China attacks New York City, wiping out its entire population. Marine ex-con Nick Morrow and his team of convicts, dubbed 47 Echo, are sent on a deadly mission - to infiltrate Shanghai and shut down its computer network. Given virtually no weaponry, the crew must rely on themselves as they trek across the dangerous countryside crawling with enemies.

As they head toward almost certain death, Nick struggles to not lose his ever-thinning thread of control. Though the convict soldiers outnumber their own military counterparts, they're looked down upon as human shields. But to Nick, they're friends. The team needs him - hell, the world needs him. The stakes are higher than ever before. This will be the ultimate battle, and the consequences will test everything Nick is and will become.

What listeners say about Supercritical

This novel is military action, not sci-fi

It is a straight forward military action novel. The setting is at some future point where there is a world war going on, but the setting, people, and weaponry are all modern day stuff (well, even if the "tank" descriptions are of fictitious tanks, I don't think the average (non-tank-aficionado) reader would know...)

The main character is just a bit smarter, faster, stronger and luckier than your average Joe, but... then again, that is the point in this kind of novel - an otherwise normal guy saves the day by dint of his superior... everything...

There is forward momentum, people get killed (other than the main character we can't really distinguish any of them though), and the day gets saved. There is not so much a plot as there is a goal/destination. But, whatever, it is a fast easy read and pretty much exactly what you should expect from a military action novel.

It is not, however, science fiction and should not be classified as such; if you bought this expecting any science fiction (other than, perhaps, it being set in a future year), you will be disappointed. The entire story is about a group of soldiers (yes, some are convicts, but they behave exactly like the non-convicts) who enter enemy territory to destroy a target. They shoot things, they get shot at. That is it.

The narration is very good; the violence is not overly graphic and there is no sex. Some occasional swearing. I will read more by this author, but, then again, I like military action fiction...