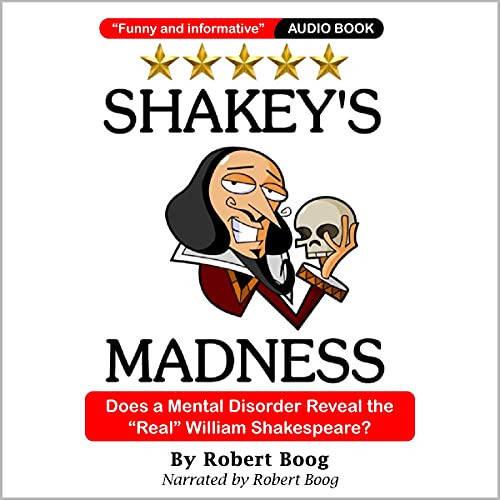 Are you fond of hearing amusing real-life stories mixed with an interesting, true-life mystery? If so, check out Shakey’s Madness.

Does a mental disorder reveal the “real” William Shakespeare? Back in the 16th and 17th centuries, bipolar disorder was a mystery, and even as late as the early 2000s, most doctors had difficulties diagnosing it. Unlike COVID-19, there is no swab test for antibodies. No blood test. It is a mood disorder, so doctors rely on their patients to “self-report” their symptoms and ask them questions like, “Were you in a good mood yesterday?”

What has this got to do with William Shakespeare? His poems, plays, and sonnets talk about the author feeling “melancholy” or depressed along with thoughts of deep distress and suicide. After all, who has not heard of Hamlet’s famous line, "To be or not to be, that is the question", and in that very line, Hamlet contemplates taking his own life.

All this talk about despair, despising oneself, and suicide? These are all bipolar symptoms. But if the real author did suffer from bipolar disorder, then would not these symptoms be found in his real life, too? Boog claims that the manic symptoms of fainting, racing thoughts, and insomnia are found in the life of Edward de Vere. According to Mr. Boog, “Whenever I ask Shakespeare lovers why all the fainting in the Shakespeare canon, I will usually get answers like poor ventilation, dehydration, or bloody tragedy on stage, which totally misses the point. Talk about fainting and 'near' fainting are found in Shakespeare's poetry."

Thus, fainting is something the "real" author must have personally experienced, but William Shakespeare of Stratford-upon-Avon was not known to black out or swoon. Sir Francis Bacon or Christopher Marlowe didn't, either. Only one man with bipolar symptoms fits a bipolar disorder profile, and that is what Shakey’s Madness is about - using bipolar disorder symptoms to reveal the “real” author of the Shakespeare canon.

What listeners say about Shakey's Madness

You don’t need a random fellow listener to tell you that these are masterpieces, so on to the production: it’s generally very good,

The plays are listed now!

I downloaded this, slightly concerned that I’d have to wade through every play to find what I needed. But the plays are listed once you download the book on the app (it’s split into 9 parts, and each part is divided into chapters, with the beginning and end of each play being clearly marked). It would be handy to have a master list of plays, in order to locate the part you need to download if you don’t have room for everything, but they are in alphabetical order so it’s easy to make an educated guess. Wonderful value to have all the plays together like this.