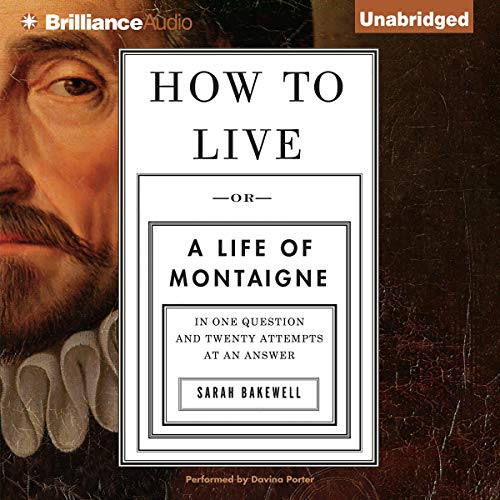 Or a Life of Montaigne in One Question and Twenty Attempts at an Answer
By: Sarah Bakewell
Narrated by: Davina Porter
Length: 13 hrs and 26 mins
Categories: Biographies & Memoirs, Art & Literature
4.5 out of 5 stars 4.3 (462 ratings)

By: Sarah Bakewell
Narrated by: Davina Porter
Free with a 30-day trial

This question obsessed Renaissance writers, none more than Michel Eyquem de Montaigne, perhaps the first recognizably modern individual. A nobleman, public official, and winegrower, he wrote free-roaming explorations of his thought and experience, unlike anything written before. He called them essays, meaning “attempts” or “tries.” He put whatever was in his head into them: his tastes in wine and food, his childhood memories, the way his dog’s ears twitched when it was dreaming, as well as the appalling events of the religious civil wars raging around him. The Essays was an instant best seller and, over four hundred years later, Montaigne’s honesty and charm still draw readers to him. They come in search of companionship, wisdom, and entertainment - and in search of themselves.This book, a spirited and singular biography, relates the story of Montaigne’s life by way of the questions he posed and the answers he explored. It traces his bizarre upbringing, his youthful career and sexual adventures, his travels, and his friendships with the scholar and poet Étienne de La Boétie and with his adopted “daughter,” Marie de Gournay. And we also meet his readers - who for centuries have found in Montaigne an inexhaustible source of answers to the haunting question, “How to live?”

“Lively and fascinating . . . How to Live takes its place as the most enjoyable introduction to Montaigne in the English language.” ( Times Literary Supplement)
“Splendidly conceived and exquisitely written . . . enormously absorbing.” ( Sunday Times)
“[Bakewell reveals] one of literature’s enduring figures as an idiosyncratic, humane, and surprisingly modern force.” ( Publishers Weekly)

What listeners say about How to Live

Interesting and in parts Inspired.

An interesting and in parts inspired take on Montaigne's essays, life, and times. I liked the Montaigne-inspired structure and the book's many insights, but alas, it still just wasn't Montaigne. I think this would be a good introduction to someone before reading Essays and for me was a good re-visit after I read (it gave me a lot of information about the region and people Montaigne dealt with consistently). But please people, don't read/listen to this to better understand Montaigne, there is a whole book he wrote that helps with that. So, use this book for pre/post Montaigne, but avoid using it as a replacement. Narration was appropriate for book.

Who amongst us doesn't love books about French thought from the 16th century? This book is not really a biography. The biographical parts are mostly to put Montaigne's writings and thoughts in to the context of the time period so that the contingent meanings for his essays come through in the narrative. Not only does the listener get an incredibly interesting peek into Europe during that time period, the author will relate how other generations re-interrupted Montaigne and his essays for their own time period.

Montaigne has been called the first modern man (by Virginia Woolf's husband) and the 18th century English will refer to Montaigne as the non-philosopher's favorite philosopher.

Many of my previous audible readings and Great Course lectures referred to Montaigne and I almost always related to what he was saying and more importantly how he was saying it, and I wanted to know more about him, but I don't like biographies. This book was a perfect compromise between a biography of a man and the more interesting part about the beliefs of a person, his affect on history and the context of his times.

This book is a nice easy read. It teaches much about stoicism, skepticism and epicureanism and the always fascinating time period of 16th century France. Most of the time the list for summer readings includes Dan Brown or Nicholas Sparks novels, if you want to read something just as fun but more edifying I would recommend this book for your summer beach reading instead.

Schrodinger or Montaige's cat? You choose…

A great aide to placing Montaigne in context both historical, intellectual and contemporaneously from the ancient to the modern…

Myself, I choose Montaigne'a cat...

If you could sum up How to Live in three words, what would they be?

It covers many aspects of Montaigne's life, writings and after-life (his reception by other thinkers) and yet manages to feel light and entertaining. It would be absurd to say that this book is as good as the Essais themselves, but it does convey something of Montaigne's idiosyncratic charm.

Is a maestro. The book is terrific but I could listen to that woman read the disclaimers on my bank statement. Hey! There's an idea..,

A straight biography in a deceptive package

I looked forward to this release from the time this book was first published in 2010. From the reviews I read, I assumed it would be a series of reflections that would draw from both Montaigne's life and his essays. And on the surface, it is. Each chapter takes a theme ("Observe closely") and quotes examples of Montaigne considering or engaging in it. But the bulk of the book is really a straight account of his life, chopped into 20 chapters, that moves steadily from youth to death and often goes into more details about 16th century French religious and political disputes than most listeners are likely to be interested in. Davina Porter is an engaging reader, and there are some memorable passages, but the text often drags. I was hoping for a 4-5 star listen, but for me it was just average.

Sarah Bakewell is a genius. In this book she gives us a moving biography of Montaigne, a history of the genesis and contents of his marvelous essays, an introduction to the history of editing his great masterpiece, and a lively and fascinating narrative of informed and popular responses to his book in successive eras. Montaigne very much feels like real presence in this book, one with a distinctive personality that is vividly represented by the author. One feels that Bakewell, along with hundreds or thousands of earlier readers have developed a personal relationship with the great writer, and Bakewell clearly explain why this in the case, though of course an overwhelming share of readers of the essays have had no contact with him, except through his writing. Bakewell also does a wonderful and interesting job of explaining the very different critical reception Montaigne's essays received among his contemporaries and in succeeding generations of readers, both in France and elsewhere.

The ingenuity of the biography helps explain why critical reception of Bakewell's book was so positive. The plain fact is that Bakewell is also a stylish writer, capable of holding our fascinated (and occasionally amused) attention, even when she is discussing the minutiae of successive printed editions or of obscure editorial quarrels. The book was warmly recommended to me by a friend who said flatly it was the best book he'd read in a year or, indeed, in any recent year. You'll probably find this kind of enthusiasm in many of the Amazon reviews. If you're interested in philosophy or in a charismatic writer and thinker in a long bygone, tumultuous era, and if you care about artful construction and stylish writing, this might be the book for you. It certainly was for me.

P.S., I simultaneously read the Kindle version of the book and listened to the Audible version beautifully read by Davina Porter. In either format, this is a terrific read.

sarah bakewell tries to answer the question of how to live
to do this she shows us just how michel de montaigne lived
how could 1500's france have given rise to such a modern soul ?

life was clearly too much for montaigne and he retreated
he feared losing his own soul and the essays were his attempt to find it
hello ! / any of this sound familiar to a modern reader ?

how can we find serenity in a world beyond our control ?
can courage and wisdom be found to know where we can make a difference ?
sarah bakewell reaches back 500 years for a very good answer

A wonderful book about how to live one's life

The enthusiastic critical reception of this book is entirely justified, and the audio version is fine. When you're finished, listen to Alain de Botton's highly entertaining book on several of the philosophers who inspired Montaigne, "The Consolations of Philosophy."

Narrator is probably good reading stories to children but her style was a bit too precious for a book on a philosopher. At times I couldn't decide whether it was the text that made clichéd choices unworthy of the subject at hand, or just her way of intoning the text. Still, for a lazy way to get enough background to then wade into Montaigne's own writing, the book itself is not bad. A more matter of fact delivery would have been preferable. I don't know whether I'll be able to stand her voice for nine more hours.