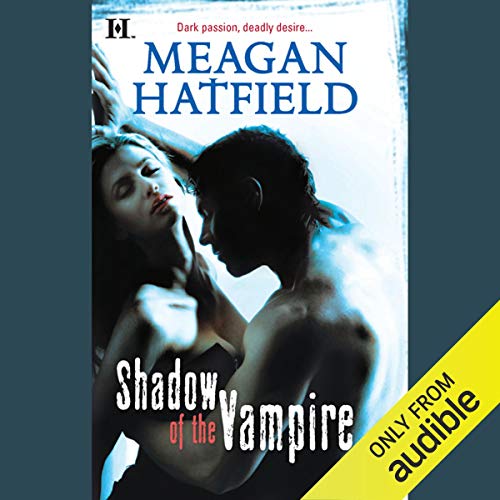 Shadow of the Vampire

By: Meagan Hatfield
Narrated by: Genvieve Bevier
Try for $0.00

Even vampires should never sleep with the enemy.

Vampire princess Alexia Feodorovna has been undead for 125 years, so it’s been a while since any man has made her pulse race. Until Declan Black. One look at his bronzed body and a fire like no other consumes her. Then she discovers that he’s a dragon lord come to take revenge on the vamps who killed his parents - and claim a crystal said to imbue its owner with incredible powers.

Alexia is ordered to torture and kill the dragon lord. Yet with each reckless encounter, she finds herself consumed by his fiery passion. A passion Declan battles, as well. Will he be able to resist the fire of lust she kindles within him and keep revenge in his heart? Or will he risk everything to quench the burning desire and claim the vampire as his own?

What listeners say about Shadow of the Vampire

A Sketch, not a Portrait

I'm a fan of the paranormal genre, but to be honest, this book fell flat for me. You got a glimpse of the "world" where the story takes place, and a glimpse of the main characters, but nothing really seemed well developed for me. The heroine's motivations weren't terribly clear at the outset (and even at the end, I'm not sure I understood them). The attraction between the hero and heroine is more or less instantaneous, as is the consummation of that attraction. There's no real build up or tension between them. The villein featured heavily in the book, but there was no complexity of character for him. He was simply a stereotypical villein. If you compare a good book to a portrait, then this book is merely a sketch. You can see the outlines, and what the story intended to be, but the colors and complexity just aren't there.

The reader, however, did a very decent job of narrating the story, keeping the reader involved even when the writer dropped the ball.

Great start to the series!

It’s a great story with vampires, dragon, magic and romance. However, I could not find other books in the series via Amazon. Why?? So, I’m left hanging🙄

I really enjoyed this :)

I am following up on a past review of my listens and I seen not such great feedback it I personally at the time enjoyed it so much I wished there had been more . There might be truth to some points made by reviewers but when I listened to it I had no complaints it just didnt have any negative effects on me and infact I really was satisfied afterwards:) It was worth a credit and now a credit isn't even neccessary if you have the romance package added it is part of your 10 free picks at once package:)

I had this book on my wishlist for so long that I forgot why I originally put it on. So, I downloaded it as a change. Big mistake. Nothing seems to work together. The paranormal (vampire/dragon) mythology is quite different than usually written, yet the differences do not seem to work and they are not well-developed. She has not created a coherent universe -- which is important to do if you are going to leave the usual vampire mythology behind.

The erotica is fairly ho-hum and the character interaction (hero to heroine and heroine to villain) are melodramatic and two dimensional.

Save your credits. There are many other established authors in these two genres that do it much better.

The story line had great potential... but it flopped for me in the middle.. just kept dragging on. The villain became to much and the hero's too little. In the end it seemed completely unreal that they would triumph. The only thing that carried the story along is the chemistry of the hero and heroine.