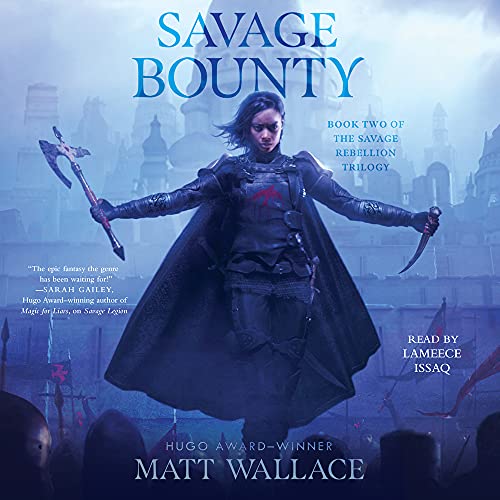 By: Matt Wallace
Narrated by: Lameece Issaq
Try for $0.00

The sequel to the acclaimed, spellbinding epic fantasy Savage Legion by Hugo Award-winning author Matt Wallace about a utopian city with a dark secret...and the underdogs who will expose it - or die trying.

The empire relies on them. The greatest weapon they ever developed. Culled from the streets of their cities, they take the ones no one will miss and throw them, by the thousands, at the empire’s enemies. If they live, they fight again. If they die, well, there are always more.

What listeners say about Savage Bounty

Wow, this series is fantastic

The stakes are getting higher, and the dangers are absolutely real.

The second book in the Savage Rebellion series is non stop action and intrigue. I'm having trouble coming up with words to use that won't spoil the story, so I will just mention that I loved this book and the performance by Lameece Issaq was exquisite.