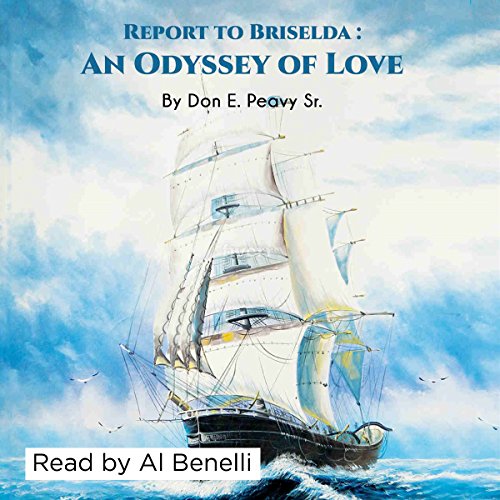 What is love? What is romantic love? How can you sustain a relationship amidst the storms of life and the turbulent waters of discontent? These are but a few of the questions with which this insightful book wrestles as we are taken on a journey through several marriages and relationships which are examined for what worked and why they eventually failed. You will not be a mere tourist on this journey. You will be actively involved and by the end of the journey, you will be changed.

What listeners say about Report to Briselda

Get out of Jail FREE!

Would you listen to Report to Briselda again? Why?

Yes... If I'm ever in "hot water" with my lover, I'd go back and reference some really "cool" things to say to make things better. This book is either written by the most prolific lover since Don Juan... or the ultimate "silver tongued" devil. A master of the spoken word...

Cyrano DE Bergerac? Don Juan? Like I said... Totally smooth responses to an ultra suspicious woman's questions about the sincerity of her suitor.

When she asks him about his infidelity to TWO of his former wives... She painted him into a corner... and he makes it out!... Unstained!

Throughout the book, there is a sense of intensity with which the principal pursues the "love of his life"... Briselda. His apparent undying love drives him to bare his not-so-lily-white soul in an effort to convince her that he is NOT the man he once was. That whole undercurrent was pretty moving...

A new "tone" for narrator Al Benelli. I've listened to many of his books and he generally sounds like a New York newscaster, but this time he sounded more like a southern preacher... almost like Morgan Freeman playing the role of a minister.

Where does Report to Briselda rank among all the audiobooks you’ve listened to so far?

Report to Briselda ranks at the top of all of the audiobooks I've listened to so far. Don Peavy seems hopelessly determined to find love and marriage at his own peril!

I wouldn't compare the plot to Romeo and Juliette, but I do see similar intensity to find and share love. Mr. Peavy is determined to be married at all costs, and it seems as though nothing or nobody will stand in his way to accomplish his goal.

A. T. Al Benelli's voice inflections and expressions certainly added life and meaning to what this author must have been feeling. Mr. Benelli sounded like he was telling his own life story, as though he felt the pain and disappointment in each of Mr. Peavy's marriages.

The most touching moment in the book for me was when Mr. Peavy left and divorced PC to find that her terminal cancer had returned. That had to play heavily on his heart and mind for a long time, especially since she lived such a short time after he left her.

I commend Mr. Peavy on such a well-written and moving narrative, with all of the special effects of life, love, marriage and disappointments. His style and content set a new bar for a lover pursuing the woman he so desperately wants to be his wife.I commend Mr. Benelli for his excellent portrayal of the person who lived through such love and marriage ordeals. If there were not different names for the author and the narrator, one would think Mr. Benelli was narrating his autobiography. Both artists did outstanding jobs in his perspective role.