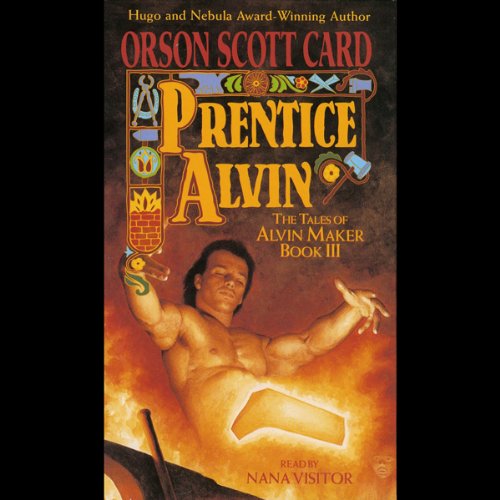 By: Orson Scott Card
Narrated by: Nana Visitor
Try for $0.00

From the 18th century into the early years of the 19th, Americans - traveling to find new homes and new lands - crossed the Appalachian Mountains and moved across the Northwest Territory, spreading west to the banks of the great river. Using the lore and folk-magic of the men and women who settled a continent, and the beliefs of the tribes who were there before them, Orson Scott Card has created an alternate frontier America.

When Alvin arrives in Hatrack River to take up his apprenticeship with Makepeace Smith and learn to be a blacksmith, he finds that nothing is as he expected. This would-be maker is on his own and the work of the Unmaker is close at hand.

Prentice Alvin is book 3 of the The Tales of Alvin Maker series.

What listeners say about Prentice Alvin

Not the book I was looking for

there really should be a large notification when two audio versions for one book exist on the same platform. This not the full cast narration version.... wasted a credit.....

This isn't the book you are looking for. This sounds like it was recorded inside of a dumpster. There is another version that is far better

I've always loved Orson Scott Card and Prentice Alvin is no exception. However, I'm unable to listen to this book as the audio quality is so poor that I'm missing things the narrator says because it simply all blends together in the static. Only time I've ever got a refund on an audio book

A great read. Awsome actors. A must re-read. 🤔👍

A great read. Awsome actors. A must re-read.
You can come love the whole cast (family)

This is the third book in this series that I have listened to and they are only getting better. Card is truely the master.