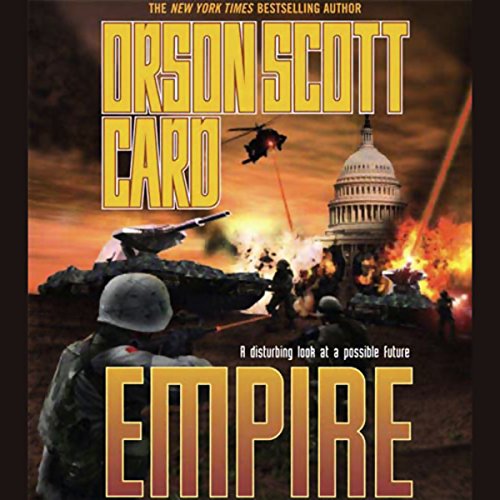 By: Orson Scott Card
Narrated by: Stefan Rudnicki
Try for $0.00

Orson Scott Card is a master storyteller who has earned millions of fans and reams of praise for his previous science-fiction and fantasy works. Now he steps a little closer to the present day with this chilling look at a near-future scenario: a new American Civil War.

The American Empire has grown too fast, and the fault lines at home are stressed to the breaking point. The war of words between Right and Left has collapsed into a shooting war, though most people just want to be left alone.

The battle rages between the high-technology weapons on one side and militia foot-soldiers on the other, devastating the cities and overrunning the countryside. But the vast majority, who only want the killing to stop and the nation to return to more peaceful days, have technology, weapons, and strategic geniuses of their own.

When the American dream shatters into violence, who can hold the people and the government together? And which side will you be on?

"Couldn't be timelier...heartfelt and sobering....All the action doesn't obscure the author's message about the dangers of extreme political polarization and the need to reassert moderation and mutual citizenship...it drives it home." (Booklist)

What listeners say about Empire: The Empire Duet, Part 1

So Says the Oracle

I'm glad to see that I'm not the only one who thinks that our current polarized political situation could lead to and an uprising. If it wasn't for the fact that Orson Scott Card did not see the fall of Bill O'Reilly coming, I would be tempted to call him a prophet.

It is amazing how accurately OSC is able to articulate the phases and ideology of the opposing forces in America today. Written a decade ago, tensions have raisen since then and are now comparable to those reflected in this book. Each year they progressively get worse. Everyone is insane.

While the pace of this book was engaging, the premise was not. Progressive democrats invading NYC with their own mechanized militia? Then easily footnoted by a few special ops boys? Kind of laughable and, at best, overly simplistic.

I stuck with this book because I kept waiting for a second or third dimension to be revealed - some gritty contradiction perhaps, or actual character development.

The final affront is the afterword in which the author, lacking any real analysis, provides predictable right-ish political commentary. Should have quit while I was ahead.

Even a great author can have a bad day

America?s War on Terror is being fought and won across the globe. Ruben Mallitch is a bona fide hero in that war and a rising star in the US Army. After completing his tour of duty in the Middle East he is promoted to Major and returns home to complete a Masters Degree at Princeton and then assume new duties in the Pentagon. Those duties include identifying weaknesses in domestic counter-terrorism efforts and formulating plans to exploit them. His ?unofficial? duties include acting as a covert go-between for the White House in the world?s hot spots.
This double life doesn?t trouble him until he witnesses a plan he prepared being executed by terrorists.
Are you hooked yet? I was! This has the makings of a fantastic story.
Orson Scott Card?s military SF offerings are unique in that the military characters are believable. In Empire, the author manages to convince us that Mallitch is both a Professional Soldier and a Patriot without him becoming a parody. He isn?t cold-blooded and mindless, he thinks about, and believes in, what he is doing!
Something terrible happened to Empire on the way to its conclusion:? having made the effort to develop the characters; the author doesn?t find anything useful for them to do!
Empire maintains Audio Renaissance?s high production standards and the reading, by Stefan Rudnicki, is clear, precise and well paced. Unfortunately their efforts cannot save this story from itself.

This audiobook annoyed me too many times. It's a neat idea for a story, but I couldn't stand the combination of Card's sometimes tedious dialogue and the monotonous, unchanging pacing of the narrator's reading. Whether it's violent action or casual conversation, the narrator never seems to alter his pace or tone (at least not in the first half of the book, which is all I listened to). I have to mention one particular scene that simply bugged me: a guy is shooting at one of the protagonists with a shotgun, and the guy being shot at evades the shot by simply jumping in the air, the shot missing him between his legs. I'm sorry, that's just stupid. Not altogether impossible I suppose, but stupid nonetheless.

A very timely story. I listened to it during the 2020 election and it struck a nerve. I can't wait for part 2.

Really a good read! I'm used to the wars in his books being in space or the future, but this seemed to be right now and it was a little scary! Almost too close to what's really happening in our world. Actually I'm glad he wrote this series when he did...It's almost like he foresaw some or what we are going through right now, Much of if was still very much sci-fi with equipment that our soldiers would love to have but only dream about. Really a great read, but read both books!

Overall good story, but the dialog between main characters can get a little bit of noxious at times. it certainly had moments that made me think "what if".

Could have been exceptional

I really appreciate the works of this author and when I started this book it sounded like it was going to be one of his best ever. I actually listened to the entire book in two sittings. The ending of the book really fell off. It almost seems like the author just wanted to be done with it so he wrapped up too many loose ends with some rather simplistic conclusions.

Even though the ending kind of let me down-I would still recommend it as a listen that is as good as most. But for this author-it could have been so much more. There was one real shocker with the demise of one of the characters-I won't spoil if for you but it comes as a real suprise.

I haven't read anything from Orson Scott Card that was quite like this before. Perhaps it is the fact that conspiracy theories are not my favorite Genre, but I didn’t really enjoy this book that much. The story was decent but there are a lot of authors who do this kind of story a lot better. And the Ideal logy that was being presented isn't something I completely agree with either.
While I too agree that we should not be so extremely left or right that we cannot see anything the other side is trying to show us. There does come a time when we have to stand up for what we believe in.

There I go assuming that I too know more than you do and feeling the need to preach my own "enlightened" theories, sorry.

This book was Just OK for me.
David