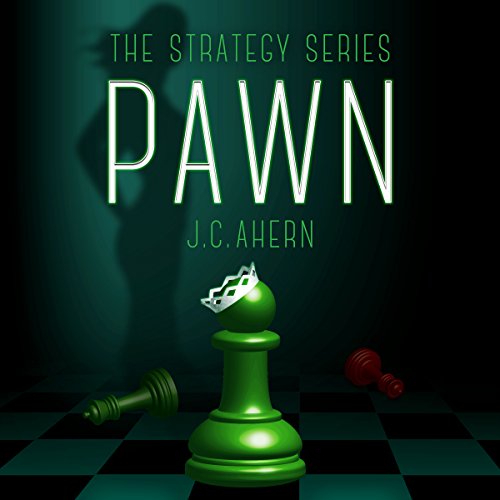 Seventeen-year-old Rogue has always classified herself as socially awkward, preferring video games over a trip to the mall. When she wakes up in a forest, she finds that life as she knew it has changed forever, and she cannot remember how. In fact, she can't remember the last six months at all. As she navigates this new world she soon discovers a talent for combat and survival she'd never had before. A handy ability in a world where humans compete in a game governed by rules she can't remember.

Ronin, a talented 19-year-old, was wrenched from his Midwest home and forced to compete with a Skaki set. Despite the set's repeated losses, Ronin has proven himself a powerful player, his sights set on surviving each match - no matter the cost. When a new pawn is added to his set to replace one they lost, Ronin begins to break out of the shell he built around himself and reexamines what he and the other humans have become.

What listeners say about Pawn

What an incredible listen!

Whatever I thought of LitRPG before, I am now on a completely new level after listening to this book. It was sensational!!!

I love chess and this book combined the idea of having a virtual reality existence within a cutthroat version of chess while an alien race calls the shots. This. Book. Was. So. Good.

The duo narration was a good call. The two narrators made for very compelling characters and kept the illusion of the game, well, real.

This was book one and a totally complete story. The epilogue set the stage for book two and yup, I'm all in.

When I first started this book, I thought to myself, "Oh, no...this is one of those weird gamey books". And I almost put it down without giving it a real chance. I am so happy I kept going. This was a very original and well written book. The author really makes you care about each character. Also, this audiobook has two narrators, and they both did excellent jobs. It always makes it easier when listening to have two narrators. It lets the reader know that the point of view is changing, which is not always easy when the book isn't right in front of you. I would love to listen to next book in this series.

This story has a great beginning, thrusting the reader straight into the action. Then it proceeds to slowly give you back story as you need it. Some of the info could have came quicker to help with the understanding of what was going on but I will say that most questions will be answered in time. I love the premise of this and it is handled well. It is written using a VR system but not in a conventional way. This process of writing gives the writer a way to delve deep into unique worlds, many that one normally could not write in within the same series. The characters are fun and keep the story interesting. Worth a read.

What a great Book!
I was not sure what to expect from a new writer. But the narration and characters drew me in immediately. It’s so refreshing to hear a book That is not just leveling/stat sheets/loot. Such an original plot an character progression. I can’t wait to listen to the next book!

I received a free copy of this book and exchange for an unbiased review. I didn't know what I would think about it at first but I was actually pretty into it by the end. I felt like it had a bit of a slow start but it really picked up.

A new Look at the game!

Pawn is one of best sci-fi related books in the Litrpg Genre that I've read in awhile, Strong female lead that doesn't let you down. Full of excitement and hope for mankind, in a futuristic setting. Space, the final frontier for immersion gaming!

Chess, Aliens, and Monsters OH MY!!!

An excellent opening to a new series, we follow Rogue a confused and deadly player in a game she doesn't remember joining and doesn't understand why or how she is so deadly. Follow along as she figures out what's going on, how she got there, and why she prevails in a game that has real-world consequences for everyone.

This is a great story with a no-nonsense MC who is level headed, strong, willing to do what she must, and is snarky and sarcastic just at the right times. This is a very well built story and MC with nice progression, crunchiness, and leveling. It doesn't go overboard in stats either which is nice. I found this book very enjoyable and am looking forward to the next in the series.

A nice twist on LitRPG

I was really surprised at how different and well done this story was. The premise seemed a little odd when I read it but I’m glad I decided to list to this book. The Main MC, secondary MC and supporting protagonists are likable and don’t constantly act against common sense. I’m also really surprised how well I was able to relate to the Main MC. I like female protagonists but I seem to have a bit of trouble finding common ground with them. She was well written, used her head and she wasn’t vindictive towards those who clearly deserved it.

As for the story, a few things didn’t make sense or add up but overall I liked it. The leveling system and what not wasn’t really fleshed out, it seemed like an afterthought or background element. The characters did level and rank up, which made them stronger and give some bonuses but that’s it. The twist on chess definitely made up for that. It made it interesting and was definitely well thought out. The ending was also wrapped up really well.

Overall, I really liked the book. I will definitely be grabbing the second in the series to find out what happens next.

an excellent start to a series that misses out on

I received this book as part of a promotion and was pleasantly surprised.

Initially I felt the story was a little slow to start as I wanted more detail and character backstory, which is my only complaint, but I would add that looking back it played really well with the theme and in reality was quick to draw me in.

The theme seems quite simple at first and is a variation on the "memory loss and how am I in a game" mechanic. I suspect this was why I was slow to get into the story as you don't get the whole background for quite a long time. But when it starts to unfold it keeps unfolding with more and more depth.

I enjoyed the characterisation and found the differences in most characters believable and well written. Whilst some of the plot is down to chance the MC is able to do well without the usual trope of being able to excel with no discernable reason.

Overall I really enjoyed the book and will buy the next one to see how the players develop.