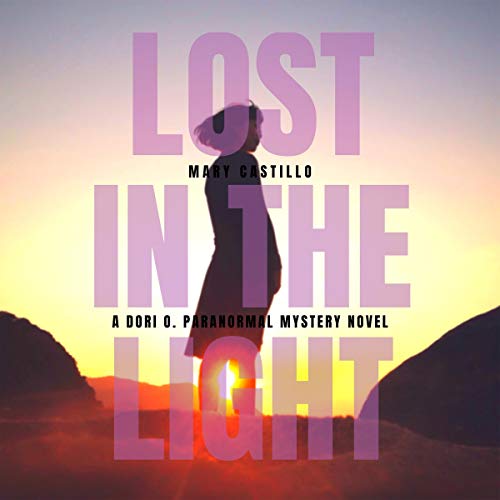 Lost in the Light

One October morning in 1932, Vicente Sorolla entered the white house on the hill and was never seen again.

Drawn to this tough but tender woman, Vicente materializes out of the butler's pantry and asks her to find his lost love, Anna. Dori wonders if she's not only about to lose her badge, but also her sanity. Dori has always been drawn to the mysterious Queen Anne Edwardian house in her hometown. But after a devastating injury that puts her career on the line, Dori isn't sure if she made the right decision purchasing this rundown old mansion.

Her wisecracking Grammy Cena has waited too long for her independent granddaughter to return home. She hires a kooky psychic to banish the ghost and a handsome contractor with whom Dori has an unhappy past. With a promise to Vicente, Dori may solve a forgotten Prohibition era murder. Or she may exhume secrets someone died to protect.

A modern gothic mystery woven with suspense, ghosts, and romance, Lost in the Light was nominated for the Daphne du Maurier Award for Excellence in Paranormal Mystery/Suspense.

Fans of Susanna Kearsley, Simone St. James, Diana Gabaldon, Mary Stewart, Kate Morton, and Victoria Holt will want to curl up with Dori on her journey to love, past and present.

What listeners say about Lost in the Light

This book kept me on the edge of my char. the writing, the atmosphere, the mystery was great. I couldn't put it down until I finished.

The characters were very well written, the plot was wonderful with the twists and turns. I enjoyed the parallel stories of Dori and Vicente. I was captivated how the story of Dori's discovery of Vincente's fate unfolded. I'm looking forward to listening to the next book. Mary Castillo's narration added a special touch to the whole experience.

Dori is a police officer who's recovering emotionally and physically from from an officer involved shooting, where she shot and killed a crazed gun toting young mother.

While Dori is on leave she buys an old historical house that she is drawn to. The house is haunted by Vincent a probation era gangster who was brutally murdered in the house. Vincent appears to Dori and implores her to investigate what happened to the love of Vincent's life, Anna.

The story is an okay listen and has promise for an entertaining series. The narration is also well done.

Yes, I would. I think she's a talented storyteller.

What other book might you compare Lost in the Light to and why?

The mirroring storylines kind of reminded me of "The Longest Ride" by Nicholas Sparks if there'd been bootlegging and prohibition.

Would you listen to another book narrated by Mary Castillo?

Yes, but I think she needs to check her editing a bit closer. Her storytelling ability is wonderful, but the recording had repeats, feedback, and background noises.

Could you see Lost in the Light being made into a movie or a TV series? Who should the stars be?

Yes. Justina Machado as Dori and Diego Luna as Vicente.

I received this book from the author as part of a blog tour. The opinions are my own.

This was a really fun story. I like the mystery, the characters, and even the two romances. Dori was a fun main character, and I thought her unintentional friendship and kinship with ghost Vicente was fun in a Ghost and Mrs. Muir kind of way. Finding out the truth of what happened to Vicente was heartbreaking. I loved all of Dori's friends and relatives. They were all easy to tell apart and added so much humor to the story.

I got the audiobook via Audible, and it was read by the author. She did a good job telling the story, but the editing of the audiobook left something to be desired. There were moments where she repeated herself, there was background noise, and sometimes weird static that was very jarring. But overall, it was a great read, and I really enjoyed it.

Wow, that’s all I can say, what a book! Dori is a police detective recovering from an injury that puts the badge she wears in jeopardy. Needing an outlet Dori buys an old house in her hometown, determined to slowly bring it back to life.

Unfortunately for Dori, that’s not the only thing to come to “life” in the old home. Vincent a prohibition era ghost enlist Dori to help him figure out what happened to his long-lost love, and just maybe along the way Dori will help solve a long-ago murder… If she's not declared crazy first.

Lost in the Light will make you feel sad, anxious and laugh out loud. I especially got a kick out of Grammy Cena, she’s the MVP of the book in my opinion.

Mary Castillo wrote and narrated this 8 ½ hour audiobook. I know what you’re thinking! "Lynda, I thought you never listen to audiobooks read by the author!" I know, I know, but the premise of the book sounded so intriguing to me and Mary did such a wonderful job on the sample, I decided to take a chance, and I’m glad I did! Mary was outstanding, she voiced so many different characters with a variety of accents including the character Meg, who was British! All of the characters in this audiobook were done well.

If you are looking for a different type of book that is part ghost tale, murder mystery and love story, you’ve stumbled across a gem of a book. Enjoy!

Lost in this Good Book!

I thoroughly enjoyed Lost in the Light. It’s a wonderful combination of ghost story and historical fiction with a modern-day heroine to root for. The author does a great job toggling between the main character, Dori Orihuela in the present day and the life story of her ghost, Vincente. The intertwining stories drew me and kept me riveted until the end.

I also loved the cast of characters in Dori’s life. I laughed out a loud a few times over the antics of Dori’s Grammy who’s unapologetically irreverent and outspoken about Dori’s life.

What really brought the book to life for me was the wonderful narration by the author, Mary Castillo. Her voice is very pleasant to listen to. And, she’s spot on with the voices and accents—not easy to do! She did a better job than some of the “professional” narrators in other books I’ve listened to. In fact, I think she could have a second career as a narrator if she wanted to.

Lost in the light

This was a good book.The story was good.Mary Castillo was a good narrator as far as voices but the sudden stops and starts,repeated words and phrases,etc were irritating.A good editing may be what it needs. Dory moves into a haunted house then hires her hig school boyfriend to rehab the place.The ghost tasks her with finding someone. I was given this free review copy audiobook at my request and have voluntarily left this review.

This book is more of a Cozy Paranormal Mystery.
Dori is a police officer on leave while she recovers from a shooting in which she killed a woman. She returns home and buys run down Victorian mansion. Her Grammy Cena decides she needs help fixing it up so she hires a contractor who happens to be Dori's former boyfriend Gavin. Dori soon discovers that her house has a ghost. Vincente was a bootlegger in Prohibition era San Diego who was murdered in her house and he wants Dori to help him find his lost love Anna. The book is told from alternating points of Dori in the present day and Vincente in the 1920s.
This book has mystery and romance with some history of California in the Prohibition. The characters were pretty well develpoed and interesting, especially Grammy Cena whom I loved It was an interesting light read. I want to thank The Audiobookworm for gifting this audiobook to me in exchange for this review. I enjoyed it.

I really enjoyed this story and the narration, performed by the author, is outstanding. She nails her distinct character personalities and their voices. There are some technical edits that need to be made to the audio file (repeated lines, background noise, etc.), and although they are distracting, the story kept me listening. Time well spent!

Lost in the Light was a wonderful read(listen to). The story line was very well done and the author did a terrific job building each of the characters up with their own personality and quirks. I am looking forward to hearing more in this series, especially to see how/how not the relationship with Gavin develops.

The author is also the narrator, and in this case does a fantastic job with the character voices and the pronunciations correctly. However, I do feel that if you are going to narrate your own book that you need to sound proof your recording area and proofread (proof listen (not sure if that is a word) ) your work. There was so much background noise, turning pages, duplicated words, long (too long/not normal) blank spaces. This made this wonderful book seem not so professional and really took away from getting into the story.

It wasn’t my favorite, but it wasn’t horrible either!! I liked the narration—was weary of the author reading it, but it was well done. I’d read more from this author again.