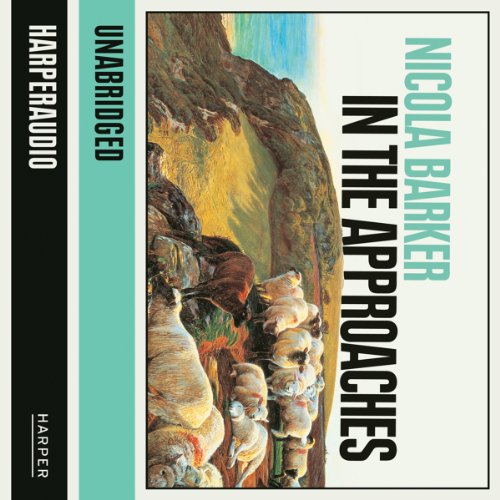 By: Nicola Barker
Narrated by: Stephen Perring,Antonia Beamish
Try for $0.00

Open yourself up again to all that terrible light and savage bliss and deafening reverberation....

Nicola Barker's readers and listeners are primed to expect surprises, but her 10th novel delivers mind-meld on a metaphysical scale. From quiet beginnings in the picturesque English seaside enclave of Pett Level, In The Approaches ultimately constructs its own anarchic city-state on the previously undiscovered common ground between G.K. Chesterton and Philip K. Dick.

On the one hand, this is an old-fashioned romantic comedy of fused buttocks, shrunken heads and Irish-Aboriginal saints; on the other it's Barker's wildest and most haunting book since 2007's Booker Prize-shortlisted Darkmans.

Following previous celebrations of the enduring allure of the posted letter (Burley Cross Postbox Theft) and the pre-lapsarian innocence of pre-Twitter celebrity (Booker-longlisted The Yips), this concluding instalment of Barker's subliminally affiliated 'digital trilogy' imagines a basis for the internet in Catholic theology. Set in a 1984 which seems almost as distantly located in the past as Orwell's was in the future, In the Approaches offers a captivating glimpse of something more shocking than any dystopia - the possibility of faith.

Praise for The Yips:

"Barker is ostensibly a comic writer, and is indeed snort-inducingly funny at times … What's more - just about uniquely in this country - she is thinking intelligently and critically about how to make [a realist] tradition work in the present day. But it's not for her virtue that she deserves to be read; it's for pleasure." (Keith Miller, Daily Telegraph)
"There are moments when Stuart Ransom has the vulgar bravura of John Self in Martin Amis's ‘Money'…but Barker is unique and it's for the pleasures of her style that one reads her." (Kate Kellaway, Observer)
"Dementedly imaginative … stomach-turningly hilarious … What she has written is a state of the nation novel of the sort Dickens and Hogarth might have jointly conjured up had they ever visited Luton." (Michael Prodger, Financial Times)
"Barker is at once sui generis and the Google-age inheritor of a tradition. The first third or so of the book gives us a Chaucerian sketch show sequence of comic set-pieces … then it takes a left turn into Shakespeare territory." (Sam Leith, Guardian)
"Barker captures - and lovingly distorts - both the rhythms and banality of language. She is, as it were, Harold Pinter on crack." (Justin Cartwright, Spectator)
"A specialist in likeable British grotesques … wackier siblings to those in Hilary Mantel's ‘Beyond Black'. ‘The Yips' cannot be faulted for its free-flowing imagination." (Tom Cox, Independent)

What listeners say about In the Approaches

Unusually constructed novel that is both compulsive and thought provoking. A refreshing style of storytelling