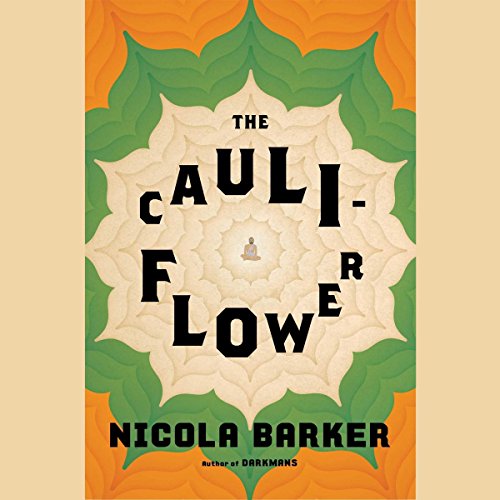 By: Nicola Barker
Narrated by: Sneha Mathan,Vikas Adam
Try for $0.00

To the world he is Sri Ramakrishna - godly avatar, esteemed spiritual master, beloved guru. To Rani Rashmoni, she of low caste and large inheritance, he is the Brahmin fated to defy tradition. But to Hriday, his nephew and longtime caretaker, he is just Uncle - maddening, bewildering Uncle, prone to entering trances at the most inconvenient of times, known to sneak out to the forest at midnight to perform dangerous acts of self-effacement, who must be vigilantly safeguarded not only against jealous enemies and devotees with ulterior motives but also against that most treasured yet insidious of sulfur-rich vegetables: the cauliflower.

Rather than puzzling the shards of history and legend together, Barker shatters the mirror again and rearranges the pieces. The result is a biographical novel viewed through a kaleidoscope. Dazzlingly inventive and brilliantly comic, irreverent, and mischievous, The Cauliflower delivers us into the divine playfulness of a 21st-century literary master.

What listeners say about The Cauliflower

I was attracted to the original hardcover book by the cover design and subject matter, but I found it difficult reading. The complex history with multiple characters and two narrative voices were a stumbling block for me as a reader. By contrast, the Audible version is easy listening and engaging. It flows easily. The two readers, one the authorial voice and the other a character in the story of Sri Ramakrishna, fulfill their roles ideally. I have left other books unfinished because of poorly matched narrators. I cannot imagine getting through this fascinating story without them. If you have an interest in the history of Sri Ramakrishna, mysticism, and Indian culture and history; if you can take the author's sometimes mischievous attitude with with a grain of salt; you will enjoy this book as I did. It was entertaining, informative, and so dense that I want to give it another listen in the future in order to absorb all its riches.

Not sure what I just listened to.

I'm not sure WHAT this book is. The readers were excellent. The story was...???? Historical? Religious? Comedy? I just didn't get it.

A beautifully illustrated story about Sri RamaKrishna! Unforgettable! Very enjoyable to listen to and in a word: Profound!

I don't know anyone else who likes Nicola Barker--she certainly seems to be a "love her or hate her" kind of author. I wondered how her writing would translate into audiobook and the answer, I think, is maybe not that well. While I am a fan of Nicola Barker's, I didn't enjoy this book nearly as much as Clear or Darkman's.

The story doesn't take place in Britain but is otherwise pure Nicola Barker with lots of "meta" and plenty of odd starts and stops. Things that go over well in the written world, or at least don't drive you batty, don't necessarily translate well into audio. For instance, when we're told that Sri Ramakirshna's name must always be accompanied by the sound of a clown's horn (pa-pa!), it's not that big of a deal to read "pa-pa!" every few paragraphs. But listening to it being said over and over again, even if only for the duration of a few pages, is kind of maddening.

Not for those who embrace literary genius

I wanted to quit after the second chapter. There is a choppiness and disconnect and maybe even a "snarkiness " which takes away from the enjoyment. I chose to listen because Sneha mathan is my favorite narrator. She conveyed the snarkiness too well and I so I found the entire story to be incredible. Sorry. Ms Parker. It's a no go .