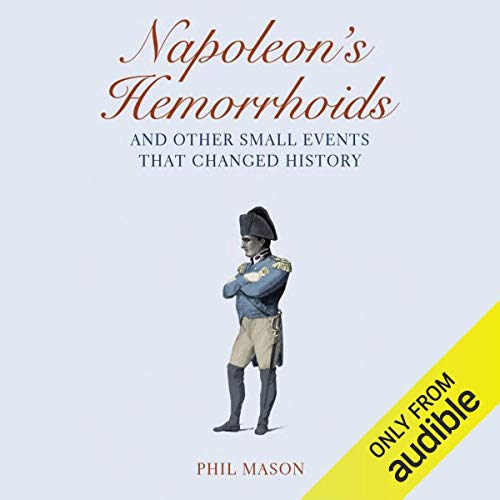 Hilarious, fascinating, and a roller coaster of dizzying, historical what-ifs, Napoleon's Hemorrhoids is a potpourri for serious historians and casual history buffs. In one of Phil Mason's many revelations, you'll learn that Communist jets were two minutes away from opening fire on American planes during the Cuban missile crisis, when they had to turn back as they were running out of fuel. You'll discover that before the Battle of Waterloo, Napoleon's painful hemorrhoids prevented him from mounting his horse to survey the battlefield. You'll learn that an irate blacksmith threw his hammer at a fox and missed, hitting a rock and revealing the largest vein of silver ever discovered, thus changing the finances of Canada forever. Interestingly, Charlton Heston was cast as Moses in The Ten Commandments because his broken nose made him look like Michelangelo's famous sculpture of Moses. Finally, no one knows Einstein's last words. They were in German, a language his nurse did not speak.

They just throw the facts too fast

I was listening to this audiobook, but you need to be keeping attention very closely, because they jump stories really really fast, and sometimes I wish they could have elaborated the stories a little more.

The stories have no sense of continuity to them. if they were grouped into timeframes within the chapters, or had a better flow in between them, the info would be a lot easier to retain.

It is apparently impossible to pronounce “Dalek”.

There is no excuse to mispronounce “Dalek”. Otherwise, the book was fine. It was sort of a marathon of factoids & historical anecdotes.

The backstory & minute details will hold your attention! I flew through this one. Didn't know where the time went. If you're a history buff like me, you won't be able to put this one down. I found myself laughing out loud more than once!!

I enjoyed learning so many fun facts while listening to this book. I wish the narrator would have paused for a few seconds between stories.

Great Book but please Slow Down!!!

I found this to be a most interesting book of historical tidbits but the reader.....needs to BREATHE between topics! The flow of speech was almost continuous, moving from one topic to another within the chapter without any noticeable pauses or breaks in speech. Maybe it is how it was edited but this uninterrupted flow causes confusion for the listener when the topic changes radically with the next sentence.

British Book read by an American

This book was written by a British gentleman, but it is read by an American. I am going to assume this was a change made for the American audience?!

This is not the first book I have run across to do this…it can be ok…but the incorrect pronunciations of a lot of proper names might drive you insane. [Example: if you are a Doctor Who fan, the pronunciation of “Dalek” will shred your soul.]

Also, I question the validity of a number of American “facts,” especially the one insinuating that the only reason George Washington didn’t want to create a dictatorship/monarchy was because he did not have any natural born children. Um, no…

Anyway…some are fun, some are weird and some are horrifying…take the facts with a grain of salt!

A close to nonstop listen, the facts just keep rolling in. Most are quick but many go into more detail. Except for the overlong list of British athletes who hurt themselves in common ways, the narration never ceases to satisfy.

Small incidents can make a difference

I liked it because I like listening to historical events. It’s amazing how little incidents add up to big altering outcomes. Like the butterfly effect.
My favorite chapters had to do with science/inventions and the arts.
My only criticism is that there are too many little stories and therefore I couldn’t absorb it all. It was just tidbit after tidbit. Maybe this could have featured less events and focused more time on a few.
Also, the narrator spoke so fast! I had to slow him down to .9.