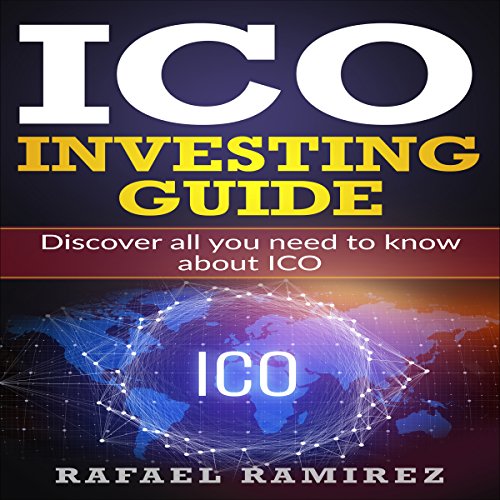 Discover All You Need to Know About ICO
By: Rafael Ramirez
Narrated by: Matyas J.
Length: 1 hr and 17 mins
Categories: Money & Finance, Investing & Trading
5 out of 5 stars 4.9 (26 ratings)

By: Rafael Ramirez
Narrated by: Matyas J.
Free with a 30-day trial

An initial coin offering, or ICO, can be easily compared to the ubiquitous IPO, or initial public offering, but I would advise you be careful doing that, as there are significant differences between the two beyond the initial parallels of them being the initial offering of an instrument.

Another difference is that an ICO is the electronic and cryptographic counterpart of the IPO to the extent that it results in the funding of a company through the issuance of tokens, but those tokens do not represent shares or equity in the company. Where a share indicates some form of ownership of the company, a token only represents the ability to buy something the company is selling using that token, or to sell that token to someone who is looking to transact with that company.

Before we go any further, it is important we distinguish between a token and a coin and further understand the blockchain, at least at the surface, because the coin and the token are both based on the blockchain. To understand an ICO and how to invest in it, you need to first start with the blockchain that it resides on and the entire ecosystem that gives rise to this technology.

I've been doing investment for 7 years. I'm interested in investing in many spheres. Cryptocurrency being one of. The information in the book is easy to digest. I'll try putting the principles into practice. Glad I took the time to listen the book. I think it absolutely worth reading.

This was a very informative book thank you I enjoy

Enough good information for the beginner and inter

Enough good information for the beginner and intermediate levels. Anyone getting into cryptocurrency should read this, especially those looking to trade.

Impressive audiobook! Full of information. The book is a very good quality. The contents are amazing! It covers everything from bitcoin to investing strategies and risk management! I have no doubt, I will spend HOURS listening this book. I absolutely love it!

The chapters on investment strategies alone are mo

The chapters on investment strategies alone are more than worth the buy.
Alan shows you not just what Cryptos are, and what to buy, but HOW!

If you are like me, beginner when it comes to ICO,

If you are like me, beginner when it comes to ICO, and just want to learn more and don’t want to spend much time researching online – than this book might be helpful for you.

Excellent primer on the ICO space especially if yo

Excellent primer on the ICO space especially if you're an entrepreneur looking to utilize an ICO to further your business. This book tells a great story and organizes the information in a nice and neat package. HIGHLY RECOMMENDED!!

Very Good for me.

Good ICO primer from someone who recently did it. Not overly technical. Good for newbies that are interested in learning more. Very easy to understand.

Admittedly, I knew very little about blockchain, coins, and ICOs before reading this book. The author does a great job first explaining important concepts in a simple, straightforward, and clear manner.

With talk of ICOs dominating the headlines in the crypto world, this audio book was super helpful to explain exactly what the heck they are and how they work. This is a nice, concise introduction to ICOs and a great stepping stone to learning further about crypto.