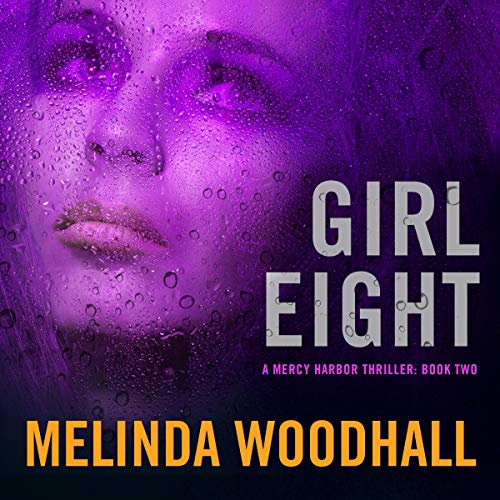 By: Melinda Woodhall
Narrated by: Melanie Carey
Try for $0.00

Will another girl be added to a killer’s deadly collection?

In this gripping second book in the Mercy Harbor Thriller series, a ruthless serial killer, who has evaded detection for over a decade, is once again preying on Willow Bay’s most vulnerable women. Can the unlikely killer be stopped in time to save girl eight?

Eden Winthrop turns to Detective Nessa Ainsley for help after a vulnerable girl goes missing, and together they discover that a prolific serial killer lurks in the shadows of their small Florida town.

Determined to stop the remorseless killer before he takes his next victim, Eden realizes that to catch the killer, and to save the life of an innocent girl, she must be willing to put her own life in danger.

And as Leo Steele works to earn Eden’s trust and win her heart, his investigation into his mother’s death uncovers a series of abductions and murders that span more than a decade and reveals the horrifying truth that lies behind his own tragic past.

What listeners say about Girl Eight

I first discovered Melinda Woodhall through Book Siren, when I read River Girls. I enjoyed the story and was happy to receive a copy of the second book, Girl Eight, for review.

Girl Eight delivered a page-turning story, suspenseful mystery that kept me guessing for most of the story.

In this installment, Eden and Nessa are recovering the events of the previous book. Meanwhile, Joe, Eden’s love interest is working assiduously to find his mother’s killer and clear his father’s name. At around the same a young girl who is a resident at Mercy House, a facility for vulnerable girls has mysteriously disappeared. Eden is determined to find the girl, but time is not on her side as a hurricane is approaching, which would make the search difficult.

It was fun reuniting with the characters from the previous book. The dynamics of Leo and Eden’s relationship has changed. They have grown closer. Eden has finally opened up to Leo about the tragic incident from her past. Her fighting spirit and her willingness to protect the vulnerable at risk to herself came to light once again.

Nessa was juggling personal and work issues. I admired her strength and determination and as the only female in the unit she had a lot to prove. She proved to be good at her job. She was smart, observant and intelligent.

The villain was evil to the core. Hiding in plain sight, he was not someone you would have suspected of anything nefarious. Therefore, you can imagine my surprise when his identity was revealed. I loved that parts of the story were told from his POV. He may appear smart, but his arrogance would prove to be his downfall.

I found the mystery riveting and complex. Danger lurked at every turn. At first, it appeared that Leo’s investigation and Eden’s search for the missing girl were separate, but as the events unfold, the link between the two cases became clear. The two cases came together seamlessly giving rise to a suspenseful and twisty ride. This was not an easy book to put down. Every chance I got I read/ listened to it.

Narration
Melinda Carey narrated once again. My listening experience proved to be better this time around. Her southern accent didn't sound forced like in the previous installment. The pacing and tone was good and she brought the characters to life.

Conclusion/Recommendation
Fans of mystery and suspense will want to pick up this series. The books are best read in order as the lives of the characters develop over each installment.

Thrilling story that kept me listening - didn't want it to end

This book kept me guessing and listening (the narrator was fantastic). There were lots of twists and action, but also relatable characters. Some were in the first book as well, and some new characters (some I loved and some I loved to hate). It's a good long listen - now I have to find something else to listen to on my commute. Hoping there's another book in the series planned.