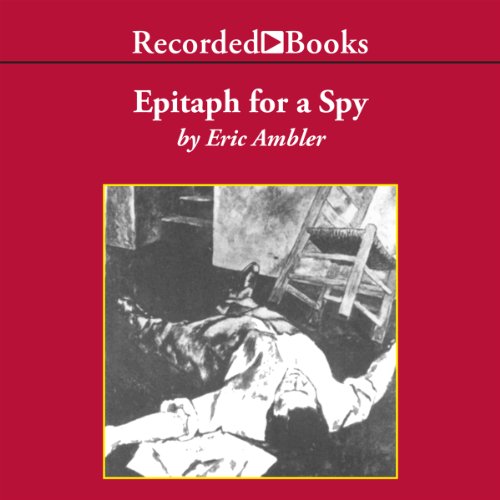 Epitaph for a Spy

By: Eric Ambler
Narrated by: Alexander Spencer
Try for $0.00

Vadassy was just another name on the guest list at the seedy Mediterranean Hotel until he was accused of spying. Then, suddenly, he was on everybody's list.
©1980 Eric Ambler (P)1982 Recorded Books, LLC
Historical International Mystery & Crime Espionage
Show more Show less

What listeners say about Epitaph for a Spy

The story was gripping and the narrator was a splendid choice. I highly recommend this title.

A breezy entry in the Ambler canon

It has been said that Eric Ambler's first novel, "Dark Frontier," was written as a kind of tongue-in-cheek pastiche of European detective fiction. If that's the case, then "Epitaph for a Spy" can be read as a self-conscious exercise in the Big House genre of crime fiction mastered by Agatha Christie and others. The action unfolds almost entirely within the confines of a hotel in the south of France. There is a diverse cast of characters, all of whom are possible suspects in a crime. Ambler does a good job of cranking through the plot machinations, but there is an inescapable sense that the work ultimately IS all just a mechanical toy. In that sense, this novel lacks the journalistic complexity of some of Ambler's other works. "Epitaph" was written right before the start of World War II, and it's as if world events had gotten too dire for Ambler to dwell on them in much depth. Even so, the best parts of the book are those moments when his characters run up against the very real political tensions of the era.

As narrator, Alexander Spenser has a perfect understanding of what Ambler is up to. There is palpable pleasure in the way he brings the international cast of characters to life. At times there is just a hint of archness in his reading, which is very much in keeping with Ambler's knowing style. More so than in some of Ambler's other books, the writing in "Epitaph" employs a sardonic wit that brings to mind P.G. Wodehouse or British humorist Frank Muir. That's not a bad thing, but anyone expecting hard-boiled crime fiction should keep searching.

Some of the best spy writing that we have.

Eric Ambler is a wonderful writer. His work has become a bit forgotten about of late which is a shame. His spy novels are just as strong as Graham Greene's snd John Le Carre's. Check him out. You wont regret it.

Plot strangely was not as strong as I would have thought but overall very good.