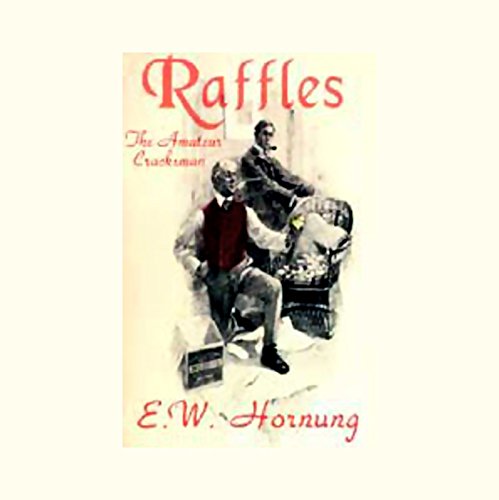 By: E.M. Hornung
Narrated by: Walter Covell
Free with a 30-day trial

Raffles is Sherlock Holmes' polar opposite, a foil for great detectives and a man with all the immoral charms of a hero-thief, plus a remarkable ability at cricket. Raffles is the godson of Robin Hood, the model for Cary Grant in "To Catch a Thief," and the inspiration of Leslie Charteris' "The Saint." As the great reinvention of the trickster for the 20th century, Raffles convinces readers to throw away their scruples and follow along for wit, bold adventures, and thrilling suspense.

Perhaps it's fitting that Hornung's character Raffles is often compared with Sherlock Holmes, since E.W. Hornung was the brother-in-law of Sir Arthur Conan Doyle!

"Narrator Walter Covell has the perfect rumbling British voice to portray the wonderful characters in these old-fashioned capers. His diction is clear in the several ranges he uses for the brilliant but rather cryptic Raffles and his unworldly colleague, the dim policemen, naive victims, and other assorted characters. This audiobook will appeal to fans of vintage British mysteries, especially aficionados of Sherlock Holmes." (AudioFile)
"Hornung's Raffles reads at least as well as, if not better than, all except the very best of Sherlock Holmes." (The London Times)
"Raffles is amazing; his resource is perfect; and naturally he has a 'cool nerve', a nerve positively arctic." (The Herald Tribune)

What listeners say about Raffles

Not my favorite reader - his accents wander between American and British. But his feel for Hornung isn't bad, and I'm happy enough to get an audiobook of one of my favorite books of all time.

Not as engaging as Sherlock

While trying to decide how many stars to give this book, I reread the publishers description. I don't think the book reaches the lofty heights described. I can't say the book is bad, nor is it really good -- just OK. I do not think it can be compared to Sherlock Holmes. It is not nearly as compelling.