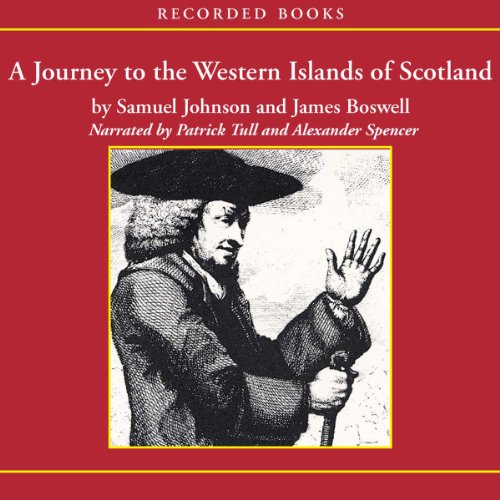 A Journey to the Western Islands of Scotland

In 1773, 63-year-old literary giant Samuel Johnson joined James Boswell, a 32-year-old Scottish lawyer, on an historic horseback expedition across the Scottish Highlands to the Western Islands. The unlikely duo's travelogue records their fascinating conversations and encounters with great wit and incredible detail. Johnson, one of the 18th century's most celebrated writers, provided an elegant and stately account of everything from Loch Ness's medicinal waters to Scotland's puzzling lack of trees. The younger Boswell focused instead on his famed companion, offering a perceptive, highly entertaining, deeply intimate glimpse into Johnson's personality. Taken together, Johnson and Boswell's very different styles perfectly complement each other, resulting in a deeply satisfying, truly original narrative.

"Delightful examples of language at its best, these tapes would be a meaningful addition to any serious literature collection." (Library Journal)

An interesting travelogue. It's billed as "unabridged," but it isn't, really. The publishers have combined parts of Johnson's "Journey to the Western Islands of Scotland" with parts of Boswell's "Tour of the Hebrides." Both books tell the story of the same journey, from very different points of view. The editing has been done carefully, so there's little overlap; when Johnson and Boswell both relate the same anecdote, one or the other has been chosen for this presentation. But a good bit of both books - especially Johnson's, the more discursive of the two - has been omitted; and the audiobook ended so abruptly that I wondered if part of it was missing.

On the other hand, taken for what it is - an invitation to sample the works of these two excellent men - it's a lovely and lively four-hour treat. Alexander Spencer is a creditable Boswell, and Patrick Tull, ever the gruff, gravelly narrator, is a wonderful Johnson. I would go so far as to say that if you want to stick your toe in the Johnson/Boswell stream, this is a good place to start.

Footnote: with the exception of this audiobook, both men have been somewhat poorly served in audio. Boswell's life of Johnson is available in either a well-produced but massively abridged version, or a massively complete version with mediocre sound quality. What's needed is a well-produced, well-performed, and sensibly abridged version: 15-20 hours, maybe: enough to linger over some of the famous episodes but not so much that the pace lags. (There's a BBC dramatization available on Audible that I hope to review soon. It's a great listen, but again, it's mostly a "greatest hits" version.)

Johnson has been served even worse - in quantity, not in quality. Apart from this book and a recording or two of his novel "Rasselas," there are no audio editions of Johnson's prose. And Johnson's prose is brilliant: rolling, thunderous, incisive, honorable, and wise. His preface to Shakespeare is one of the greatest pieces of criticism ever written. His essays for The Idler, The Rambler, and The Adventurer are full of awesome turns of phrase and "aha!" moments. Couldn't somebody be persuaded to put together a 15-20 hour anthology of Johnson's writings? Patrick Tull is no longer with us, but maybe Kenneth Cranham could be persuaded to do the honors.

As it stands now, once your taste has been whetted by the "Hebrides" audiobook, there's nowhere much to go for more of the same except print. (Not that there's anything wrong with that.)

I wasn't too keen on 2 narrators at first, I thought the one voicing Samuel Johnson's part used way too much bombast. But before long I loved it and found it completely fit his words and personality. (I knew nothing of the man when I started reading it, if I had I would've realized the reading was perfect right from the get go.) This book was very interesting and funny!

Boswell and Johnson are an amazing duo and this first person account of travels in Scotland is interesting. Patrick Tull's voice is amazing. Recording quality mediocre.

Would you listen to A Journey to the Western Islands of Scotland again? Why?

I think I will listen again. I really enjoyed the voices of Patrick Tull and Alexander Spencer. I thought I had a better understanding of Samuel Johnson and James Boswell thanks to their voicing of their writing.

I don't have a favorite. I was surprised to learn from this book that Samuel Johnson believed that men generally would be overmatched by women intellectually and that was why women were not educated as men were in his lifetime. I had no idea that men of his education and society would even consider that educating women would be desirable.

I liked James Boswell very much. He was so intelligent, so well mannered and humble. He obviously admired Samuel Johnson and wanted to impress him with Scotland. I think that while Johnson was inconvenienced quite often during their travels, Boswell did succeed in changing Johnson's mind about Scots in several instances.

What about Patrick Tull and Alexander Spencer ’s performance did you like?

I thought they captured the personalities quite well. I enjoyed the give and take of the different characters even though the men wrote their accounts separately, the audible book created an illusion of a conversation which entertained and amused me.

I hate this question.

If you are interested in books about life in Scotland in the 18th century, or how and Englishman and a Scotsman viewed life in the 18th century, I know you would enjoy this. The difficulties of travel, food, lodging and just getting along for a period of time for people of different backgrounds is very interesting. The narration is very enjoyable.