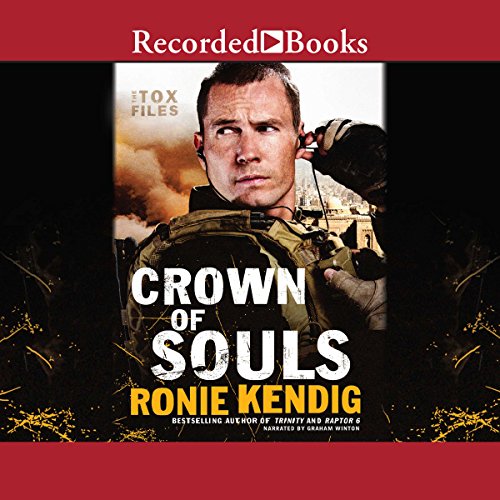 By: Ronie Kendig
Narrated by: Graham Winton
Try for $0.00

Suddenly shot at a picnic, Tox discovers it's a strange invitation to join an old sniper pal's quest for revenge over his fallen team. Despite the injury, Tox feels sympathetic to the cause - and battles a growing darkness within himself. But when he learns Alec is using a deadly ancient artifact in his plan, Tox must fight the monster without becoming one.

Six months after stopping a deadly plague, Cole "Tox" Russell and his team are enjoying a little rest. That peace is short-lived when a sniper shot hits Tox. The enemy is discovered to be one of their own, a rogue Special Forces team operator.

Alec King is perhaps the only person as skilled as Tox, and he's out for justice. Furious with orders that got his men killed, he intends to make those responsible pay. And he insists Tox join him, believing they are the same breed of soldier.

Afraid his old friend is right, Tox battles a growing darkness within himself as he and his team engage in another deadly encounter with antiquity. It appears Alec is cheating - he's using a mysterious artifact, a crown that history has linked to some of the worst slaughters in humanity. Racing to stop Alec before his vengeance is unleashed, Tox must fight the monster without becoming one.

What listeners say about Crown of Souls

A Combination of Gems

A deeply involving story told by a gifted narrator. History, fiction, a solid knowledge and understanding military and Special Operations life and methods all combine to make this a book it's hard to set down. I'm moving on to volume two of the series right now. Very enjoyable to this old veteran.

I enjoyed this book. It takes place 6 months after the first book ended. This book also explains a lot of background that the first book alluded to. This book also gave more information on the members of Tox’s team
I truly enjoyed all the action. I kept wondering how the author could base this fantastic book on two verses of the Bible! I looked further into Nimrod and discovered this king has created a lot of historical intrigue. The amount of research the author has done is amazing.
Once again Graham Winston did a marvelous job narrating this incredible book!!!

Beginning and ending were good but the middle was water torture. Disappointed in the plot.

These books are always quite interesting. Tox and his team are memorable characters. I enjoyed the ending very much. Looking forward to the next in the series.