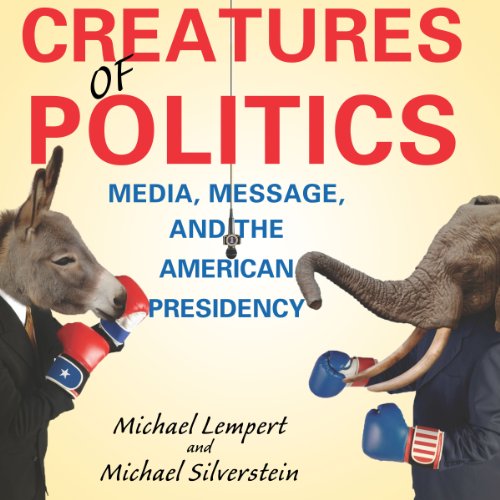 It's a common complaint that a presidential candidate's style matters more than substance and that the issues have been eclipsed by mass-media-fueled obsession with a candidate's every slip, gaffe, and peccadillo. This audiobook explores political communication in American presidential politics, focusing on what political insiders call "message". Message, Michael Lempert and Michael Silverstein argue, is not simply an individual's positions on the issues but the craft used to fashion the creature the public sees as the candidate. Lempert and Silverstein examine some of the revelatory moments in debates, political ads, interviews, speeches, and talk shows to explain how these political creations come to have a life of their own. From the pandering "Flip-Flopper" to the self-reliant "Maverick", the authors demonstrate how these figures are fashioned out of the verbal, gestural, sartorial, behavioral - as well as linguistic - matter that comprises political communication.

" Creatures of Politics makes for a fascinating read and an illuminating look into the complex realm of political rhetoric." ( Publishers Weekly)
"A timely, fascinating, pathbreaking book by two outstanding scholars that is sure to appeal to a wide audience." (Richard Bauman, author of Voices of Modernity: Language Ideologies and the Politics of Inequality)
"This book captures better than any other the way 'messaging' works in the mediatic public sphere. The authors have developed a sophisticated analytic framework, while their lively account of the culture of presidential communication remains sensitive to both the comedy and the seriousness of its subject." (Michael Warner, Yale University)