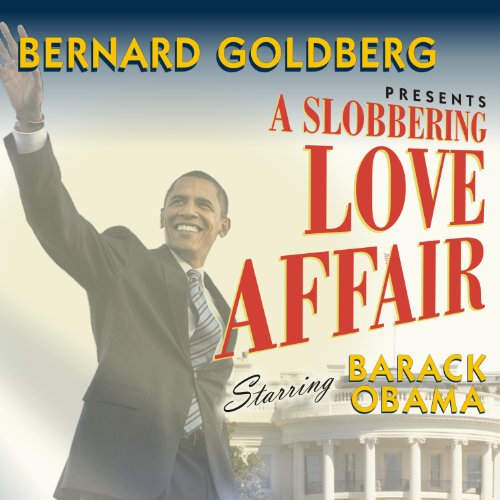 By: Bernard Goldberg
Narrated by: Alan Sklar
Try for $0.00

Do the mainstream media have a liberal bias? Sure they do, says CBS veteran and New York Times best-selling author Bernard Goldberg. But the media crossed an important line in the 2008 presidential race, moving from their usual unthinking liberal bias to crass partisanship of the crudest kind, practically acting as spin doctors for the presidential campaign of Barack Obama. In A Slobbering Love Affair, his most provocative book yet, Goldberg demonstrates how the media launched an unparalleled effort to ensure the election of the man they regarded as the One.

From the thrill Obama sent up Chris Matthews's leg to the outrageously slanted "news" reports of the New York Times, Goldberg shows in exacting detail how the media, abandoning even the pretense of objectivity, moved from media bias to media activism. With his trademark blunt, honest insider's perspective, Goldberg reveals:

What listeners say about A Slobbering Love Affair

Goldberg is an excellent author...concise and engaging. This work was well documented. Who could argue after watching the MSM over the past year? His sobering conclusion is all too real. When there is no investigative media left, who is there to keep an eye on things in Washington? We've seen in other places and times what happens when the press capitulates. It never leads to anything good.

Goldberg is right...I wish he weren't.

Easy read very funny. It's sad that this book is true. l read it twice .

Loved it! The book is right on about the biased mainstream media. Where would we be without Fox News!!!

Attention Audible: this is the way books need to be narrated. Alan Sklar is the best narrator I have heard. In all the right places, he uses his voice to deliver jubilation, disbelief, snark, dryness, wit, sarcasm, outrage, excitement, somberness, and on and on, bringing the written word to life! This is what every narrator should do, as appropriate to the tone of the text, of course.

I now have about 200 audible books, I have listened to this one 4 times already because I just enjoy the narration, it's actually entertaining in and of itself, and just pulls you through the whole book before you know it.

As far as the content of the book and the author, anyone who knows Bernard Goldberg knows he is conservative who worked in the liberal news rooms for decades and is well accustomed to the left-wing bias. He left the news side and since has written a couple books, and does conservative media analysis. He is smart, funny, and most importantly a seasoned journalist who knows how to do research, so....
....the chapters are organized in thought and content, making the case, USING EVIDENCE FROM THE PRESS, that the main stream media vacated their roll in vetting and challenging Barack Obama in his 2008 BECAUSE THEY WANTED HIM TO WIN.

Goldberg makes the case that the 2008 election was the first time the American liberal news media en masse actually moved from a position of passive bias favoring one candidate over the other, to actively downplaying negative stories of one candidate and then attacking the candidates critics ... remember the national news media investigating and then reporting on the credentials of Joe the plumber, a private citizen who asked Obama a tough question at one of the debates ?

I highly recommend everyone interested in politics read this book because the way most Americans get their political and world news is from the main stream press, and they are subject to shockingly deep bias and not above manipulating the stories to the betterment of their own world view and desires. It really is a shame. They are supposed to be "Objective".

You have to listen to this

We all saw it happening, right. I don't think members of the press would even dispute that they are, and were, completely on board the O express. Maybe its tired, and maybe you are weary of the obvious, but you will shake your head and laugh. Bernie does a good job. Its probably time for a sequel.

I liked the content of this book in general. Mr. Goldberg could have covered everything in about an hour of reading though. Same things over and over and he spoke so slow I put my ipod on 2x speed and that was about right for me. I am from southern VA and have a slow drawl so I cant imigine how slow it would be to my northern friends.

An excellent and accurate book. The media is killing itself and is failing to serve the purpose for which the founding fathers intended.

Very informative and a good listen!
Too bad Bernard didn't narrate it though!