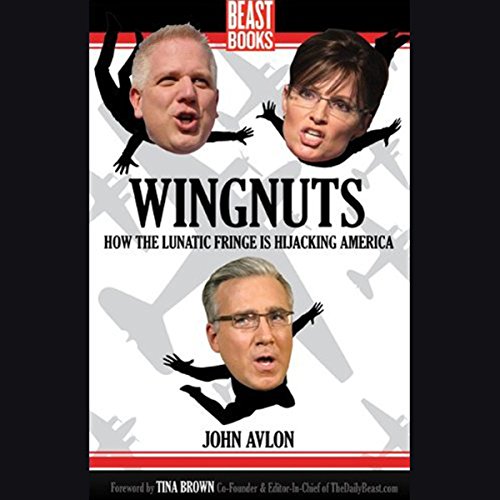 A bad craziness is snaking through America in the first years of the Obama administration: the wingnuts are on the attack!

Whats a wingnut? A wingnut is someone on the far-right or far-left wing of the political spectrum - professional partisans, unhinged activists, and paranoid conspiracy theorists. Barack Obama campaigned as an antidote to the politics of polarization, promising to transcend the old divides of left and right, black and white, red states and blue. But in the first year of his presidency, he is presiding over an eruption of hate and hyper-partisanship that threatens to mock the promise upon which he was elected.

Wingnuts is a reported exploration of the outer reaches of American politics, told from the perspectives of a radical centrist who believes that the far right and the far left are equally insane.

On the way, we'll meet the Queen of the Birthers, Orly Taitz, and the Orange County pastor who is openly praying for Obama's death. We'll get a look into the life of Obama senate opponent Alan Keyes and the draft-Palin movement, as well as the liberal anti-war Obama protestor Cindy Sheehan and her allies in Code Pink. Wingnuts also looks at people trying to bridge the political divide, like the Afghan war vet who founded Republicans for Obama.

First of all, download it; it's a great book. The thing that keeps popping up to me was how isolated the "rational" majority feels in this overtly partisan political and media landscape. It's good to know that there are a lot of other people out there that are clear minded and agree with both sides while also hating them. If I hear Keith Olberman say "Sir" one more time to Dick Cheney, I'm going to barf and this book really taps into how moronic both parties can be sometimes. It also spotlights how the lack of campaign finance reform (curbed even further by the Supreme court) now makes it even harder to get clear thinking people into government positions. Avlon really is balanced in his approach and I think he's pretty good on CNN as an analyst. There's plenty of material from both parties to get mad about. Good read overall and now I can come proudly out of the closet and say that I truly am a Centrist...

This book addresses the ever increasing trend towards hyper-partisanship that occurs by both media personalities and politicians of the "left" and the "right". The author labels the purveyors of this hyperbolic speech as "Wingnuts" and is willing to names names (Cindy Sheehan, Orly Taitz, etc.). After the author advances this idea the rest of the book is nothing more than examples of hyperbolic speech by those on the left and right and a call for everyone to return to the center and bipartisanship, essentially the book is a one note wonder. What the author does not do is a critical examination of the hyper-partisan speech of various Wingnuts to explore exactly how far will a Glenn Beck go to advance his selected narrative (let's say global warming is a hoax). Mind you, I don't care what GB truly believes, does GB's hyperbolic speech about climate change really have the same negative impact on society as Cindy Sheehan's hyperbolic speech about George Bush or Orly Taitz's hyperbolic speech about O'bama's birth certificate. The author implies that Hyperbolic speech is all the same.....but it's not. The world will pay a real and destructive cost for our continuing delay in addressing global climate change but I doubt any excess in speech by Sheehan or Ms Taitz will amount to personal negative consequence for any of us. As for the politicians named as wingnuts (Alan Grayson is a wingnut Dick Cheney is not?) I would suggest that if the author wants a return to bipartisan governance, that we need to critically examine which politicians have embarked on hyper-partisan policy (let's start with the passing of bills by the use of the reconciliation process as a benchmark) and label those politicians as wingnuts. The problem of hyper-partisan media is more critically addressed in the book True Enough, by Farhad Manjoo and I would recommend this book over "Wingnuts".

5 of 8 people found this review helpful

I was hoping this book would be a good analysis of the extreme rhetoric afflicting our political system. While there were some elements of that in the book, overall, it was simply a regurgitation of anecdotes about extremists and what they've said. It offers no insight into political solutions, and basically is part of its own self-described "finger pointing" problem. It simply aims to convince the reader that we are in a terrible situation and it's extremists' fault. No solution. No explanation why. Just finger pointing. Furthermore, I was hoping for a balances view of both liberal and conservative extremism, but the book skews more towards criticizing conservative extremism. Some part of the book were good and insightful, but overall I found myself just waiting for it to add something of value or just end.

Everyone needs to see that BOTH sides have Wingnut

Would you consider the audio edition of Wingnuts to be better than the print version?

What was one of the most memorable moments of Wingnuts?

The author showing that both the right and the left have what he terms "Wingnuts."

Have you listened to any of John P. Avlon and Tina Brown (foreword) ’s other performances before? How does this one compare?

No, but I would be interested in reading others because this was very good.

Right, Left, take your pick - they're all crazy!

Wingnuts gives a great look at the fringe elements in both the Right-Wing and Left-Wing of the country. Both sides will cringe or puff up in defense of their people. It gives a good smack-down of those considered extreme.

I knew this book was written by a former Giuliani speech writer and hoped that the book would be informative. Instead, it is just a chronicle of extremist views from the right and left. If you keep up with the political news, there is little information presented that you haven' heard before..although there were some UNinteresting details of some of the radical behaviors that I had not known about before...

Although the book covered both far right and far left views, I would estimate that ~70% of the book dealt with far right excesses.

There was no real point to the book other than to illustrate extreme views from both sides. I don't think either conservatives or liberals would think this book worth the time.

Rather hurridly written, or so it seems from some reading errors by the narrator. Interesting and worth reading, but much more like a news report than a novel.

1 of 4 people found this review helpful