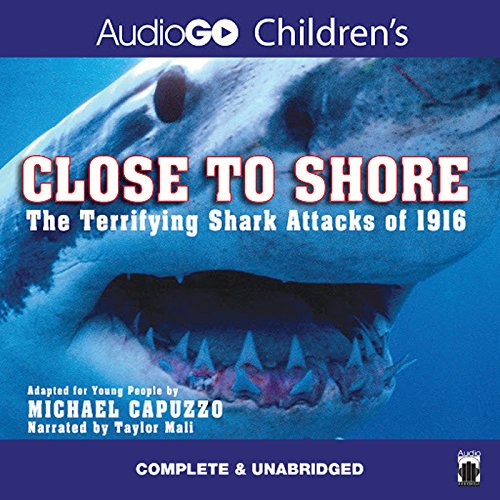 By: Michael Capuzzo
Narrated by: Taylor Mali
Try for $0.00

The summer of 1916 was brutally hot, driving thousands to the Jersey Shore to indulge in the newfangled activity of swimming in the ocean, and a good swimmer could strut his stuff in front of an appreciative audience. But happiness turned to horror as a killer invaded this idyllic scene - with never a warning and showing no mercy to its victims. Soon the beaches were filled with screams as this monster of the sea dragged unsuspecting vacationers down under the waves, chomping off limbs and leaving pools of blood and horrified onlookers in its wake.

How many deaths would it take before the truth about this terrifying monster would be known? History and hubris. Drama and daring. Science and sizzle. It's all here in one package, brought to life by the extraordinary voice of Taylor Mali.

What listeners say about Close to Shore

The author of Jaws had borrowed a lot from this

Tragically the real story is just as terrifying as the fictional story.
I was 10 years old when I saw Jaws. Living in a coastal town, we were already aware of the possibilities of shark bite. We didn’t consider it an attack, just bite. Rarely did they happen in California. The movie Jaws seemed far more unrealistic giving what we were taught about sharks. Still, it gave us all a little more pause to contemplate swimming out into deeper water just off the shelf.
If I’d known the real story behind the movie I am not sure if I’d swam beyond the beaches waves.
I did learn the real story many years later as an adult. The true historical story has been retold by a few authors.
This audio book does justice to the historical story. Although in previous retold history about the type of shark in question being a Bull Shark instead of a Great White because of the fresh water river attacks. Stating that a Bull Shark is as aggressive as a White, but a White could not go so far upstream and survive in fresh water as a Bull Shark has been known to do.

It's a sad and fascinating story, well written, if a bit florid at times. But the narrator was over the top trying to bring drama and excitement to a story that was already pretty heart pounding. I had to speed it up to 1.3 to mask the narrator's melodramatic efforts.

I enjoyed the lack of knowledge of the time and the fact we learned so much in a short amount of time.

BEWARE of Dark, Quick and Fierce Life in the Deep

This true story allowed me to enjoy yet another story about sharks. I was surprised to had been able to learn a few new things about sharks and their behavior. It also reminded me of Peter Berkeley’s JAWS in many different parts. This book is one book that is not only entertaining but also educational with a spectacularly written glimpse at the unknown world under the sea. Enjoy

Where it all began. What sparked the idea of Jaws. This was a fascinating read about the real events that took place that would later result in one of the biggest blockbuster movies of our time. This book brings you back to the core of why so many people have a media influenced fear of sharks. However, 100 years later, science has proved time and time again that sharks are not to be feared, but highly respected. Yet the majority of the population still has a lasted impression by Peter Benchley's work.

Living close to the Jersey towns in which these attacks occurred, I found it fascinating to read of the events in 1916!

White sharks are your friends

Fabulous I enjoyed every minute. The reader was perfect. I felt as if I were swimming along with the shark