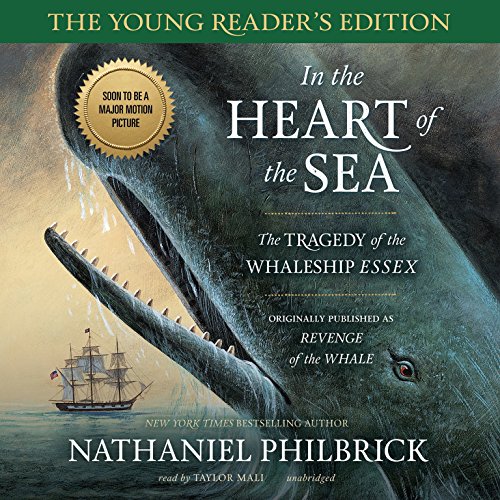 In the Heart of the Sea: Young Reader's Edition

By: Nathaniel Philbrick
Narrated by: Taylor Mali
Try for $0.00

In the Heart of the Sea brings to new life the incredible story of the wreck of the whaleship Essex - the inspiration for the climax of Moby-Dick. In a harrowing pause resister, Nathaniel Philbrick restores this epic story to its rightful place in American history.

In 1819, the 240-ton Essex set sail from Nantucket on a routine voyage. Fifteen months later, in the farthest reaches of the South Pacific, it was repeatedly rammed and sunk by an 80-ton bull sperm whale. Its 20-man crew, fearing cannibals on the islands to the west, made for the 3,000-mile-distant coast of South America in three tiny boats. During 90 days at sea under horrendous conditions, the survivors clung to life as, one by one, they succumbed to hunger, thirst, disease, and fear.

In the Heart of the Sea tells perhaps the greatest sea story ever. Philbrick interweaves his account of this extraordinary ordeal of ordinary men with a wealth of whale lore and with a brilliantly detailed portrait of the lost, unique community of Nantucket whalers. Impeccably researched and beautifully told, the audiobook delivers the ultimate portrait of man against nature. At once a literary companion and a pause resister that speaks to the same issues of class, race, and man's relationship to nature that permeate the works of Melville, In the Heart of the Sea will endure as a vital work of American history.

What listeners say about In the Heart of the Sea: Young Reader's Edition

A Remarkable Tale of Nautical Heroism and Seamanship

As an offshore boat captain and a property owner on the island of Nantucket ,This tale of the sea is remarkable and it’s honesty and accuracy. It truly captures the incredible bravery it took to get on a boat and spend years, not just months or weeks to eek out a living on the other side of the world.
Those familiar with the island will recognize the venerable surnames associated with this true story. And overworked phrase in the review of books: “I couldn’t put it down“, truly applies to this no holds barred epic tale.

In this ridiculously sanitized and dumbed down version negroes are called "African Americans," which is absurd. Many of the negroes on the Essex were not even American, so it's not only a feeble attempt to sanitize history and use PC terminology, but it's inacurrate. I guess this is what the publisher desires for "young readers," i.e. intolerant, ignorant, shallow narcissists on Facebook, Twitter, and Tik Tok.

This is the real classic.

Moby Dick might be hailed as a classic although Melville’s language gets in the way of its reading. The Heart of the sea is the real classic, told in a language that is not ambiguous or florid. This book is a riveting read; I could not put it down.

a great, true story that is educational and entertaining. Captivated me from the very first.

A well told historic account of a tragedy. School children should be given this as reading material instead of Moby Dick!

First time for me to write a review. I thought this book and the narration was great. I had so much fun listening to this I could hardly stop. Fascinating absolutely fascinating. My best Audible so far!

glad I chose the abridged version

it was ok. narrator changed pace and volume that made it difficult to stay with him while listening in a car