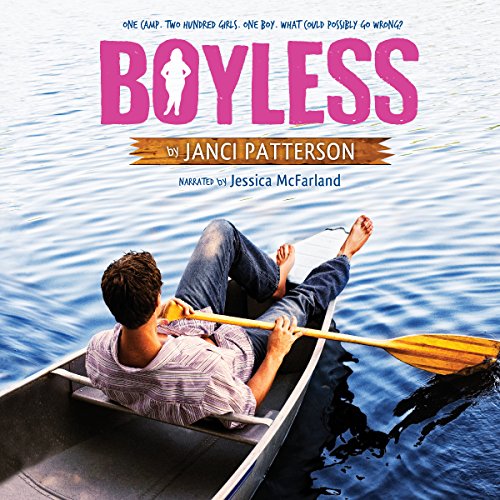 Nothing was going to ruin Bryn's boyless summer. She was all set to have a fantastic experience working at all-girl Camp Timberpine, away from the outside world, away from her food-obsessed mother. With no boys around, Bryn was no longer the bottom of the totem pole of desirability. She was only River, art counselor, still fat, but without the constant reminders that her body shape took her right out of the spawning pool, like a salmon who couldn't swim upstream.

And then he appears - the camp director's son, up for the summer to build the camp a new outdoor stage. Logan is more handsome than Bryn would like to admit - and he's also a threat to all of Bryn's summer plans. As the other counselors throw themselves at him, Bryn knows that any one of them might be the lead in Logan's summer romance. Even worse, Logan seems to have pegged her as the safe girl - the one he can hang out with without getting constantly hit on, and no amount of Bryn's caustic sarcasm will get him to leave her alone. In fact, he almost seems to like it.

Bryn's hope for a boyless summer rapidly turns to anything but. But could Logan ever be interested in her as more than a friend? And can Bryn let go of her fears and give romance a chance?

What listeners say about Boyless

Teen angst in its finest

This book is the epitome of teen angst. Bryn is a cynic who doesn't quite stand up for herself. She is overweight and semi uses that as an excuse for no one to like her like the other "perfect" girls. When her boss's son arrives at the all girls summer camp she works at, her expectations are thrown sideways. Bryn holds herself back and in doing so ends up being an enabler to some bad behaviors, especially with one camper who has some special circumstances. That camper ends up being in some serious trouble and is one of the contributing factors for Bryn to finally snap out of some of her bad passive habits.

Overall, it was good but I won't be reading this again. It was too much teenage angst. Granted all the character in the book except one are all less than 20. I had mixed opinions about the narrator. She had a pretty flat tone throughout the book but it kind of matched how I probably would have read Bryn in my head so it fit well with the character.

I loved this book. It was beautiful. It showed a girl in all her insecurities and the boy who liked her anyway. I just wish it was longer. Janci is now on my favorite authors list.