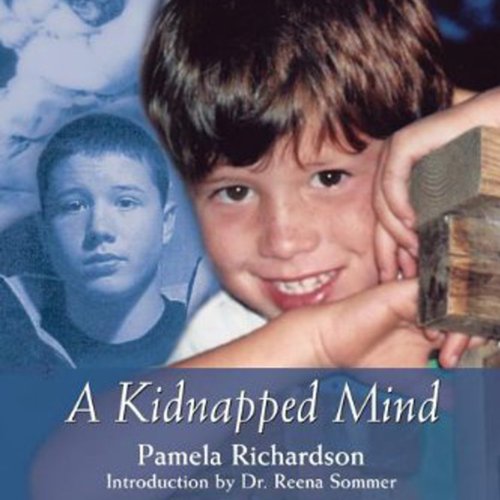 By: Pamela Richardson
Narrated by: Julie Eickhoff
Try for $0.00

How do we begin to describe our love for our children? Pamela Richardson shows us with her passionate memoir of life with and without her estranged son, Dash.

From age five Dash suffered Parental Alienation Syndrome at the hands of his father. Indoctrinated to believe his mother had abandoned him, after years of monitored phone calls and impeded access eight-year-old Dash decided he didn't want to be "forced" to visit her at all; later he told her he would never see her again if she took the case to court. But he didn't count on his indefatigable mother's fierce love. For eight more years Pamela battled Dash's father, the legal system, their psychologist, the school system, and Dash himself to try and protect her son - first from his father, then from himself.

A Kidnapped Mind is a heartrending and mesmerizing story of a Canadian mother's exile from and reunion with her child, through grief and beyond, to peace.

What listeners say about A Kidnapped Mind

Absolutely! Any parent who has been a victim of Parental Alienation can not only relate to this story, but learn so much from the mother who stopped at nothing to maintain a relationship with her child despite the efforts of an ex-husband determined to destroy it.

This is a true story. There are no favorite "characters"

The narrator did an outstanding job of placing emphasis where it belonged - She could easily have been telling the story from her own experience.

Yes, it is that engaging.

I'm a mother experiencing parental alienation. I'm just beginning my journey through this nightmare. I found this book comforting in that I am not alone but horrifying at the thought another parent could be so inhumane to his child and to another parent.
Pam is an inspiration to me.

Wow. This hits home, and hit it hard.

Such a sad story of how parents can put their children in the middle and damage them for life, and how the justice system is not just. Thank you for telling your story. It gave me strength to fight harder.

A must read for anyone experiencing PA

Touching account of how a child is emotionally abused... Easy to read. Addresses issues surrounding parental alienation and how it damages everyone involved.

Heartfelt with love joy and peace .. I loved it.

as a parent of two PAS children this book was both painful and an enormous blessing. well written.

I loved it from beginning to end
I hoped and cried for her. Saddly He was a victim of a vicious vindictive father.

This is a very good audiobook on PAS

This audiobook is a very good but very tragic story of a case of Parental Alienation Syndrome (PAS). Even if you aren't interested in PAS this is a very good story.

The story starts of slow at the time of the divorce, but if you stay with the story you will not be disappointed. The story describes very well the progression of the Syndrome along with the moments of hope, but more often the constant frustration of not being able to protect your child from the abuser who in this case is a high powered attorney and knows how to manipulate the legal system.