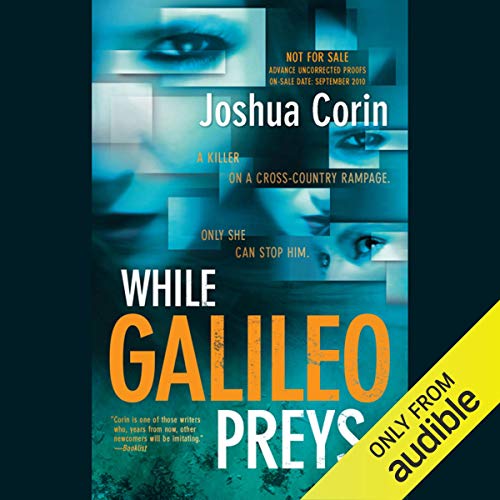 By: Joshua Corin
Narrated by: Lauren Fortgang
Try for $0.00

"If there were a God, he would have stopped me."

That's the message discovered atop an elementary school in downtown Atlanta. Across the street are the bodies of fourteen people, each quickly and cleanly murdered. The sniper Galileo is on the loose. He can end a life from hundreds of yards away. And he is just getting started.

Where others see puzzles, Esme Stuart sees patterns. These outside-the-box inductive skills made her one of the FBI's top field operatives. But she turned her back on all that eight years ago to start a family and live a normal life. She now has a husband, a daughter and a Long Island home to call her own, far removed from the bloody streets of Atlanta.

But Galileo's murders escalate and her old boss needs the help of his former protege. But how can she turn her back on her well-earned quiet life? How would she be able to justify such a choice to her husband? To her daughter?

And what will happen when Galileo turns his scope on them?

What listeners say about While Galileo Preys

The story wandered about so much and was not cogently assembled that I found it irritating to listen to...the narrator didn't help much either.

What was most disappointing about Joshua Corin’s story?

Lack of cohesiveness and strong characters.

I wish I could tell you that...

If you could play editor, what scene or scenes would you have cut from While Galileo Preys?

No particular scene stands out -- one reason I supposed I disliked it!

Please take it back!!!

Would you consider the audio edition of While Galileo Preys to be better than the print version?

Pretty good story; twists and turns; keeps you on your toes.

Which character – as performed by Lauren Fortgang – was your favorite?

Some parts were sad

Would have been better if I have read this book

Would you try another book from Joshua Corin and/or Lauren Fortgang?

Not if it is narrated by Lauren Fortgang.

I think this would have been a better book with a different narrator. The narrator was good with third person female, but her male voices were terrible. She went low, slow and sultry with the male voices which made them sound more sexual than actual men speaking. Ruined the whole effect for me.

A Fine Novel marred by whistles

As an FBI agent,Esme Stuart was talented. As a wife and mother, she's equally so, and far happier, but now, her old boss needs her expertise once more and however reluctantly, she must answer his call. She owes him.

While Galileo Preys is a great concept, a well-conceived story which I wish I had read instead of forking out for the audio. While reading makes my eyes tired, the rendition of this book made my ears hurt. The narrator's sibalence jars and detracts.I tried headphones, earbuds, and listening through the computer's speakers. Nothing helped or changed what sounded liike a flock of little birds, or maybe a nest of hissing snakes. Warning: always listen to a sample before purchasing.

Great beginning, but too much left unanswered.

What did you love best about While Galileo Preys?

The beginning and the different story lines.

Yes, too the end.

The confusion and pain of her parents decisions.

The only character who knew what happened to her parents didn't spill the beans, so I left the book feeling irritated.