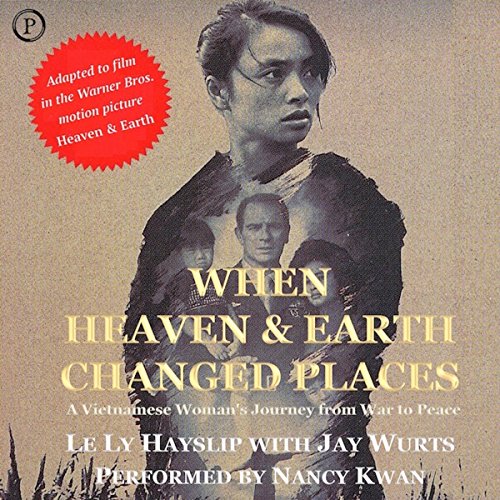 When Heaven and Earth Changed Places

This haunting memoir tells the brutal story of the Vietnam War from the perspective of an innocent victim whose childhood was dominated by violence, devastation, and conflicts between the teachings of her culture and the realities of war. The youngest in a close-knit Buddhist family, Le Ly Hayslip was 12 years old when U.S. helicopters landed in her village. She was raped and "ruined" for marriage by Viet Cong soldiers, imprisoned and tortured by the South Vietnamese, and sentenced to death by the Viet Cong. Ultimately fleeing to the U.S. with her children, she finally found peace, and in 1986, she was reunited with her family in Vietnam. The story of her homecoming, interwoven with her memories of the war years, paints a vivid picture of a noble, optimistic woman and her native country.
©1989 by Le Ly Hayslip and Charles Jay Wurts (P)1989 Dove Books on Tape Inc.
Biographies & Memoirs Military
Show more Show less


Over the past four decades, many people have written about the Vietnam War in an effort to make sense of the raging debates, the staggering death and destruction, and the lingering trauma. History is often complicated, biased, or missing key information, especially when it comes to war. Arm yourself with comprehensive knowledge of the conflict with our selection of titles detailing the Vietnam War, from fiction to nonfiction, personal stories to histories.

What listeners say about When Heaven and Earth Changed Places

This book is quite remarkable, but the narrator and the condition of the recording make it impossible to listen to, I had to resort to the book instead. Too bad.

This is a horrible audible only because it doesn't read word for word of the book, and is skipped most of the book. I have no idea what was going on the entire time or where to read along to.

I was very disappointed with this audio for the book. It does not tell the whole book and it jumps around sentences. It is very frustrating. I am listening to it now and do not know where I am in the book as we speak. The chapters in the title is also wrong.

I was very excited to find this audiobook on audible.com initially, but I later found out that the reading did not include the complete book, which I need to have completed for class which left me to still need to actually buy the book and read it. :-(

My heart is aching after listening to this book. It's incredible how strong this woman and others that lived through the war. It makes you appreciate woman, family and our lives today.

The person reading says the viet words in a Chinese accent. That is awkward. Other than that, a good read by her.

an honest expression of the realities of war.

This book gives insight into a peasant girl's experience of war. good to read to understand what 'taking sides' is really about, and how it matters less than loving and forgiveness. Very honest and real.

Abridged version! Don't get if you want full book!

I can't give this a fair review because I was disappointed I missed the fact that it is abridged,

A beautifully written and tragic story I found both an inspiring perspective on change, and an insightful guide on hope and forgiveness. Unlike other listeners, I had no issues with the performance, even at faster speeds. If you are not comfortable with accents it may be a problem, but for most outside of insular communities it should not be a concern.

Having visited Danang several times and spoken with many people, including some of Hayslips contemporaries, I agree with some opinions that what this book may perhaps sacrifice in terms of literal adherence to events, it more than makes up for in a great story and vivid impression of those tragic and temultuous times. It also gives an insight into how some (of the many different peoples in and around that region) felt and were motivated to do what they did and how the events subsequently shaped their lives.

I really enjoyed the narration. It was a unique style but seemed to me wholly fitting. I listened to this book while looking out at the similar life and scenery in a neighbouring country I was travelling through - it made it so much more memorable than focusing on a printed page could have ever been.

such a moving story!

helps understand the challenges of growing up in a war zone. empathize with refuges and migrants, it's amazing the hardships some people have lived through.

A story of survival and courage, truly moving.

This book opens your eyes to the horrors of war and its far reaching consequences on those it touches. How it can turn ordinary people into monsters never ceases to frighten me. The book describes Le Ly's life and how it unfolds as she grows from a girl to a young woman. It does not sensationalise war, it is purely a story of human survival against the odds. At times it was hard to listen to and I had to stop and take time away, appreciating all the good I have in my life. Man's inhumanity to man can never be fathomed. Yet here are people who have seen such horror and atrocities and are still able to build lives for themselves and even find forgiveness.
I am fortunate enough to have travelled to Vietnam a number of times, a part of the world that stole my heart many years ago, and I think it is important to hear these people's stories and appreciate the history behind the ever growing Westernisation that is taking place.