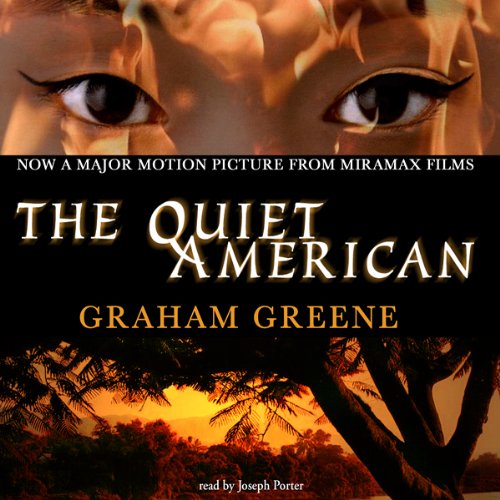 By: Graham Greene
Narrated by: Joseph Porter
Free with a 30-day trial

Alden Pyle, an idealistic young American, is sent to Vietnam to promote democracy amidst the intrigue and violence of the French war with the Vietminh, while his friend, Fowler, a cynical foreign correspondent, looks on.

Fowler's mistress, a beautiful native girl, creates a catalyst for jealousy and competition between the men and a cultural clash resulting in bloodshed and deep misgivings.

Written in 1955, prior to the Vietnam conflict, The Quiet American foreshadows the events leading up to the Vietnam War. Questions surrounding the moral ambiguity of the involvement of the United States in foreign countries are as relevant today as they were 50 years ago.

"There has been no novel of any political scope about Vietnam since Graham Greene wrote The Quiet American." ( Harper's)
"Greene is a superb storyteller. He evokes the most actual streets, the most vivid skies, and individuals who can have a lacerating reality as they search the labyrinth of their lives." ( Newsweek)

What listeners say about The Quiet American

Because Audible asks us about performance, I feel that I should bring it up. But first, because of a recent trip to Viet Nam, I decided to get and listen to this book. The story, itself, is remarkable and very prescient regarding American impending tragic and misguided involvement into Southeast Asia. But at it's heart, "The Quiet American" is a tale of two dissimilar men and their love for a beautiful Vietnamese woman. One man is an older British newspaperman saddled with a wife back in England. The other is a young, naive, low level, diplomat from Boston. The bonds, these two forge in friendship and rivalry, whether in a Saigon dance club or in the heat of battle, takes up the majority of this book.

Unfortunately, Joseph Porter, fails miserably on all accounts in his narrating. Aside from his stilted readings of prose that is both beautiful and exciting, his accents, age and sex differentiation's are atrocious. His Englishmen seem to all come from some strange middle-class. Fowler, the stories narrator, is a mid-fifties hard drinking and smoking Londoner and yet he sounds like bland radio personality. Pyle his rival and friend is even worse, sounding like a late forties mid-westerner with an sixth grade reading level. All the other characters just sound canned-spaggetti versions of real people.

Seriously, forget listening and read the book.
Audilble please redo this classic and terrific story with a much better voice.

I just could not listen to this narrator

with his silly attempts at an American accent and overly stilted British one. The story is a good one.

People need to take it easy on the narrator. His upper crust British accent is perfect for the material. His "American accent" is a bit distracting at first, mostly because of all of the horrible reviews it got. It isn't that big of a deal. He uses it relatively rarely throughout because the book contains much more narrative than dialogue. The writing is exquisite.

This reader is unbearable, could only stand it for an hour. Listen to a sample before you buy this one.

Bostonian With a Southern Twang...kinda

While the story was intriguing enough, the narration was a great distraction. The attempt at an American accent (that should have been Bostonian but came across as a bad Southern accent) was poor to be generous. If you want to know what the American accent sounded like, watch Young Frankenstein and listen to the character "Inspector Kemp." It was to say the least very distracting, bordering on annoying.

I had to read this book for a U.S. History course in college. I got through a good portion of the book by reading - but decided to buy the audiobook as listening is much more convienent. After 5 minutes of listening I had to turn it off. The narrator is so unlively and boring that it made the book unbearable. Take caution and listen to the sample before buying.

I still give it two stars, because the story is excellent for those who are history junkies :]

Would you try another book from Graham Greene and/or Joseph Porter?

Yes, of course, Graham Greene is someone to be read and appreciated.(I gave the "story" 4-stars on the basis of its reputation.) But listen to Joseph Porter again? Not ever.

What was one of the most memorable moments of The Quiet American?

The shame of it is that I listened only to 70 minutes or so until finally giving up. I instead will have to complete the book by finding a printed copy to read.

Who would you have cast as narrator instead of Joseph Porter?

Anyone else would have been better. Certainly an experienced actor could have done better. (I cannot imagine the gentleman is or had been a professional actor.) Charitably, one might say the only value Mr. Porter brings to the narration is his British accent as Greene's character telling the story is an Englishman. But Porter's reading of the text is so stilted that even his accent does not compensate for his lack of storytelling ability and his very mechanical reading of the text. There is little flow in his spoken sentences. Very little expression. And his intended American accent is atrocious. Think of the worst attempt an Englishman might give when offering a Texas accent and that's what he gave to the title character.

Great disappointment and wonder (as in I wonder how Porter was chosen to read the story however many years ago).

Rarely do I critique a narrator in such a way but it is for good cause. This is an example of a recording that should be removed for the list or at least carry a caveat emptor notice that one MUST listen to the sample recording. I didn't and I regret that I did not.

The Quiet American of the title is not the simple aide worker he seems to be...he has been sent to Vietnam to open a door for American influence, to secure a place for American power to grow from a tiny beginning. The American government sees that the French are about to lose the country, and the Americans do not plan to stand by and let the country go "communist."

Greene astutely points out that to the peasants in the rice fields, who have been there for hundreds of years and will be there for hundreds more, the style of government in the capital, whether it be Hanoi or Saigon or elsewhere, matters little. The rice farmer is concerned with his work and with feeding his family...he knows nothing of the democracy of the Greeks or of the socialism of Marx.

But powerful nations are determined to play out their chess game in Vietnam, indeed in all of Indochina. And this quiet American is calm on the surface but roiling inside with his idealism of saving these little brown brothers from the evil of communism....saving them even at the cost of killing a few, or more than a few of them in the process.

Along with a morally ambiguous plot, standard in Greene novels, there is an unusual love story involving two western men who are captured by the allure of a young and beautiful Vietnamese woman. For both men she is life itself...but she may also be death, perhaps for the one who wins her and also for the one who loses her.

An earlier reviewer did not like the narrator, the reader of the audiobook. Like him, I say listen to a sample. I did not find the reader to be unsatisfactory. For me, the reader simply disappeared as I got caught up in the story. Isn't that the way it should be?

If you could sum up The Quiet American in three words, what would they be?

I thought that Porter's overall reading was fine except for his voicing of the title character, which was some sort of guttural south-western thing. If he watched a few Matt Damon movies, or even Mayor Quimby for that matter, he'd get a better feel for a Boston accent.

I would like to have known more of Phoung, her thoughts, her views, her decision making process.

Vigot, as he is torn between friendship and duty is one of the more interesting characters.

My major critique is that many of the American accents by the reader sounded very similar to each other. As such, there in a passage where the Americans were speaking with each other, it was hard to follow who was who.