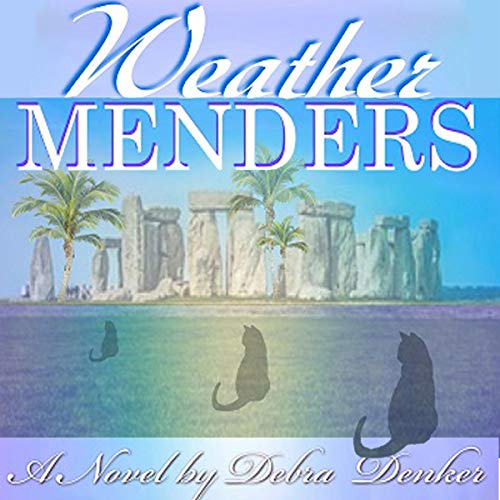 Weather Menders is a cli-fi novel for the hopeful. What if time travelers from 300 years in the future told you that there was a chance that you could prevent catastrophic climate change, plagues, and wars by going back in time to key pivot points and ethically altering the outcome of rigged elections? What if failure would result in the end of all life on the planet? Would you go?

In post-plague 2050 Britain, palm trees tower over the rice paddies of Stonehenge. Tara MacFarlane, a weary 96-year-old anthropologist originally from Taos, New Mexico, longs only to finish out her life in peaceful Buddhist meditation, and rejoin the great love of her later years, the humanitarian Scottish-Afghan doctor Xander, in a future incarnation. Suddenly one stifling autumn day Tara, her great-granddaughter Leona, and Leona’s boyfriend Janus are faced with a trio of time travelers from a future alternate timeline where humanity and the eco-system survived and thrived.

The fate of Earth falls squarely on the shoulders of Tara, Leona, Janus, and Tara’s small gray cat, Georgie, who shows a surprising aptitude for telepathy. Time is short to reverse catastrophe that will bleed through into the alternate timeline, and the time travelers must first determine the ideal pivot points by reading Time Code vibrations off the great standing stones of Avebury. Unexpectedly joined by the brave and wise cat Georgie, the six plunge into the Time Circle of Stonehenge on their mission. Where and when will they travel, and will they succeed in restoring the Earth and humanity to balance?

What listeners say about Weather Menders

A snapshot of a grim future that could be. Interesting theories on the political causes. Much more spiritual than I had expected, but in a good way.

An audiobook for these times

How utterly fascinating that this audiobook was released on March 30, 2020. In the midst of the COVID-19 crisis, it doesn’t seem as fictional to me as it would have before now. I have enjoyed cli-fi books in the past. This one grabbed me as another possible outcome of our denial that we have been gambling with our future.