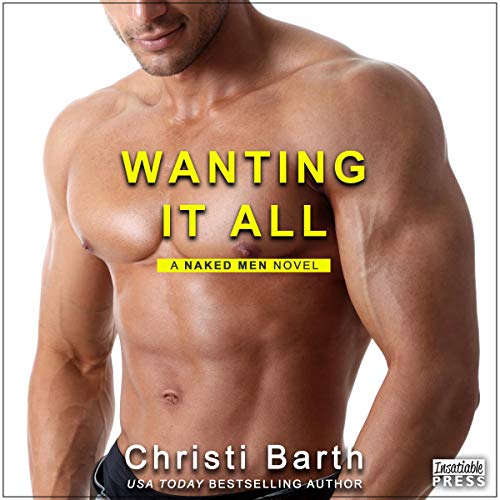 By: Christi Barth
Narrated by: Victoria Mei,Tristan James
Try for $0.00

In the follow-up to Risking It All, hailed by Lauren Layne as “the perfect escapist read,” the heartthrobs of the Naked Men blog and podcast get a little too real about friendship, love, and sex. For one wealthy bachelor, the trouble starts when all three collide....

After narrowly surviving a bus crash in high school with his best friends, science geek Knox Davis resolved to become so successful that he could have anything and everything he wants. Now he’s über-wealthy, a huge business success, and a notorious ladies’ man. Knox refuses to limit himself to one woman, but when his latest conquest - a blond beauty from the Alaskan bush - challenges his superficial ways, Knox begins to see the world through her eyes, and finds he likes what he sees.

A nurturer at heart, Madison Abbott wants to put down roots. She left Alaska to meet Mr. Right - and to track down Logan, the half-brother she’s never met. Instead, she finds Knox. Although the sexy-as-sin bachelor may not seem like marriage material, Madison’s starting to think that Knox is The One. But Knox refuses to settle down, especially once he learns that Madison is his best friend’s little sister. Now it’s up to her to convince Knox that she’s everything he really wants.

“The second book in Barth’s Naked Men contemporary romance series (after Risking it All) sparkles with friendships, a touch of humor, and a fresh, bright voice.” (Publishers Weekly)

“Wanting It All has everything I want in a romance - laughs, sighs, and a lot of swooning!” (Cassie Mae, author of No Interest in Love)

“Wanting It All was a fast-paced, enjoyable romance read. The characters were complex but also easy to connect to, and the story was strong and easily provided an escape from the real world.” (Obsessive Book Nerd)

What listeners say about Wanting It All