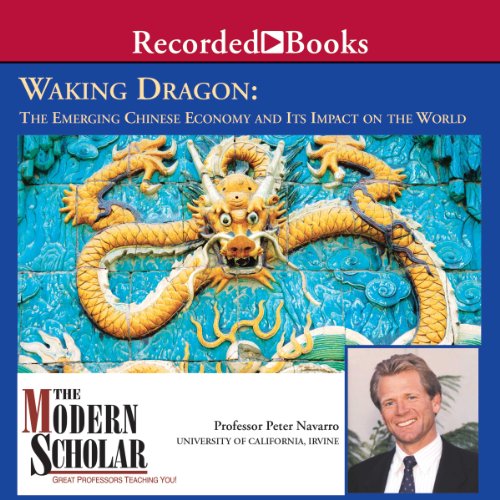 At the dawn of the 21st century, China has emerged as the "factory floor" for global production, providing the world with cheap goods at the astonishingly low "China price". But there is a very steep price to pay for these low-budget consumables - a price that very well may have dire consequences for the health and security of the planet.

In this eye-opening series of lectures, business professor and best-selling author Peter Navarro dissects the coming China wars and their implications for all mankind. China's predatory economic policies are not just about inexpensive goods pricing out the competition. China's rapid economic growth has serious implications for issues ranging from oil prices and energy security to global warming and environmental pollution - and from U.S. political independence and financial market stability to hot-war military conflict.

Napoleon once said, "Let China sleep, for when she wakes, she will shake the world." Over the last 30 years, China has not merely risen from its slumber; its economic growth rate has been nothing short of astounding. Through this incredible growth process, China has now emerged as the powerhouse of global production. It sells to the world at competition-crushing low prices, often undercutting foreign competitors by 50 percent or more, and we as consumers benefit greatly.

Unfortunately, this story doesn't end with a cornucopia of cheap Chinese goods. Rather, it is a story about how the rapid and often chaotic industrialization of the most populous country on the planet has put China on a collision course with the rest of the world. With Professor Navarro's course, you will receive not only a detailed analysis of the burgeoning Chinese economy, but a long-range overview of the risks facing the world because of China's unsustainable rate of development.

What listeners say about Waking Dragon

Too American Much American Jingoism

While Navarro raises a number of interesting points about China during the course of his lectures -- moreso in the last half, I should note -- he very deliberately bookends each of his lectures with hawkish, overly simplistic and pro-American rhetoric. Navarro frequently engages in rhetoric to the effect of "China is a bogeyman and threat to America" without making any real effort to provide context. Since Navarro actually does have a good facility for salient facts about China's situation and past -- usually buried in the middle of his lectures somewhere -- it is difficult to escape the sense that Navarro is deliberately hamming up the fear rhetoric in a ploy to make the book more salable to hawkish types in the United States. I have a background in international relations, and was disappointed by the overshadowing of a more balanced look at political and geostrategic issues by the bull-headed patriotism that Navarro often slips in to.

Fear of the Truth

It is a time-honored and oft-used method to restore peace of mind in the face of a disturbing report: deny it and criticize the source.

What would have made The Modern Scholar better?

This work has a badly hidden message, namely the advocating for the west to go to war with China. The idea seems to be, that sooner or later a war will be both necessary and desirable. The Modern Scholar-series should, as usually is the case, be informative and objective, without a trace of any political agenda. This episode makes one question the truthfulnes of the rest of the series.

Would you listen to another book narrated by the narrator?

What character would you cut from The Modern Scholar?

I am a big fan of The Modern Scholar-series, but 'Waking Dragon: The Emerging Chinese Economy and Its Impact on the World' was a huge disappointment.