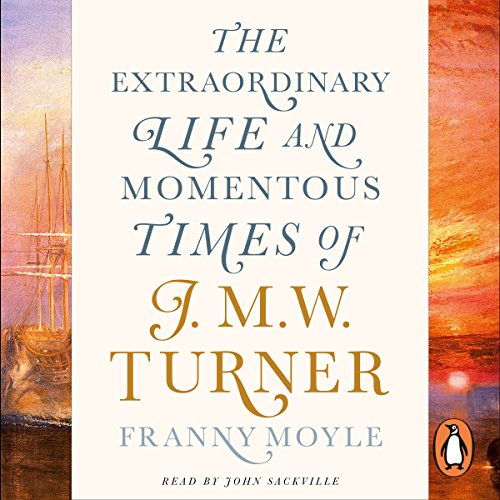 By: Franny Moyle
Narrated by: John Sackville
Try for $0.00

J. M. W. Turner is Britain's most famous landscape painter. Yet beyond his artistic achievements, little is known of the man himself and the events of his life: the tragic committal of his mother to a lunatic asylum, the personal sacrifices he made to effect his stratospheric rise and the bizarre double life he chose to lead in the last years of his life.

Franny Moyle tells the story of the man who was considered visionary at best and ludicrous at worst, a near mythical figure in his own lifetime. A resolute adventurer, he found new ways of revealing Britain to the British, astounding his audience with his invention and intelligence.

Set against the backdrop of the finest homes in Britain, the French Revolution and the Industrial Revolution, this is an astonishing portrait of one of the most important figures in Western art and a vivid evocation of Britain and Europe in flux.

What listeners say about Turner

Ms Moyle has written a wonderful biography of Turner the genius and Turner the hitherto somewhat enigmatic man. This is a comprehensive account of Turner and his art, his society, the art world, trends, techniques, developments, family, friends and critics. For art lovers, and anyone who has stood in admiration or wonder in front of a Turner painting, this book is a treat. Turner, the driven artist, the distant de facto husband and father, the astute businessman, the warm friend, emerges from the shadows. Mr Sackville, by and large, does a fine job of narration, but some mispronunciations (eg chiaroscuro, gouache, Chigi, Giudecca) reduce the rating from an otherwise five stars to four.