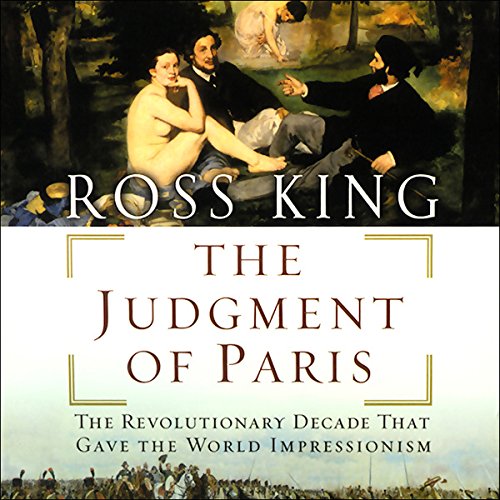 By: Ross King
Narrated by: Tristan Layton
Try for $0.00

While the Civil War raged in America, another very different revolution was beginning to take shape across the Atlantic, in the studios of Paris. The artists who would make Impressionism the most popular art form in history were showing their first paintings amid scorn and derision from the French artistic establishment. Indeed, no artistic movement has ever been, at its inception, quite so controversial. The drama of its birth, played out on canvas, would at times resemble a battlefield. With a novelist's skill and the insight of a historian, Ross King reveals how Impressionism would reorder both history and culture as it resonated around the world.

A tale of many artists, The Judgment of Paris revolves around the lives of two, described as "the two poles of art": Ernest Meissonier, the most famous and successful painter of the 19th century, hailed for his precision and devotion to history; and Edouard Manet, reviled in his time, who nonetheless heralded the most radical change in the history of art since the Renaissance. Out of the most fascinating story of their parallel lives, illuminated by their legendary supporters and critics, King recalls a seminal period when Paris was the artistic center of the world, and a revolutionary art movement had the power to electrify and divide a nation.

"King is a master at linking pivotal moments in art history to epic rivalries....Supremely engaging and illuminating." (Booklist)

What listeners say about The Judgment of Paris

Is this book for you? Yes, if you are an artist or have an interest in European cultural history.

Ross King certainly made an entire era come alive for me. It was fascinating to learn about the emotions and politics behind so many great paintings. Above all else, the author showed me how culture shapes our understanding of beauty and artistic achievement.

Additionally, the reader of this book gave an animated and engaging performance.

This was my first experience with Ross King, and after "Judgment of Paris" I am hungry to read more of his work. I thought it was a very enjoyable and entertaining "listen". Unlike some of the previous reviewers, I don't speak French, and so, was not disturbed by the reader's poor pronunciation. I listened to most of the book at my computer, which allowed me to search the web for most of the pictures mentioned in the story. This capability made the book an interesting interactive experience. All in all it was a great audio experience that I would recommend to anyone interested in art, art history, or just a good story.

This is an excellent exploration of the political, social and artistic background that led to the birth of Impressionism. It is a very detailed, in-depth look at the artists Manet and Meissonier, their work and how that work both exemplified and defied the artistic trends and political environment of 19th century Paris - the crucial time period that both shaped and changed the art world.

This is not a book for the casual art observer, but an in-depth exploration for those seriously interested in the Impressionists and/or the evolution of art during the 19th century as well as serious fans of Manet and Meissonier. Meissonier who, prior to this book, was rather unfamiliar to me exemplifies the ultimate, classically-trained French artist of his time. The author contrasts Meissonier with Eduard Manet who was was a key player in challenging the VERY strict dictates of the Academie des Beaux Arts in Paris. The Academie was the ultimate authority in mid 19th Century Paris as to who did or did NOT get presented during the annual exhibition each year.

This book gives an excellent, in-depth exploration of the numerous influences and happenings that resulted in the birth of Impressionism. It helps significantly to either be familiar with or have access (at least via internet) to copies of the paintings discussed here while King explores their significance and import. The beauty of reading a book like this today is the almost instant access the internet can provide to these works while reading the book. Its a bit like having your own personal docent step you through the foundational works of Impressionism, being able to see how one influenced the other.

I used this as research for a recent study tour I was leading to Paris featuring both the Louvre and the Orsay museums and I found the material here both well presented, fascinating and an excellent preparation for my trip. I've always loved the Impressionists and studied them for years, but this helped to fill in some of the blanks surrounding both their work and its revolutionary effect on the entire world of art.

The Judgment of Paris offers a story of rebellion and art's transition from classic to impressionistic realism. Art's transition takes place in the context of war. Though Ross King’s book is largely about an art movement, it is also about France’s transition from monarchy to republic. King shows that art and history are judged by Paris’ events.

King cleverly melds the transition of art with transition in politics in "The Judgment of Paris". Change is shown to be a hard; with unpredictable consequence. Consequence of change is measured by time and recorded history. Change of minds and alliances inch society closer to something different; both in art and politics. History records the value of the difference.

It is pretty commom knowledge the impressionist had a difficult cultural battle to become even somewhat accepted. At the end of this listen I am still not positive if France has totally accepted impressionism or the Americans love of the genre make it impossible to believe the style is not loved universally. Ross King's Michangelio and the Pope Ceiling is such a great listen that comparison is unfair. This is a good, interesting listen but difficult. It has taken me almost a year to complete. I love art especially this period but to give this book more that 3 stars is impossible - art lovers have at it, the rest take a pass.

For me there is no better way to learn about history than the historic novel. "The Judgement of Paris" follows the parallel careers of the French painters Meissonier & Manet: one the most respected and sought-after painters of his day, the other a struggling artist who would eventually help define the Impressionist art movement.

The story goes back & forth between the careers of both men before, during and just after the time that the Impressionists were setting up their own public showing, after being refused from the Paris Salon. You get a real feel for the sensibility, politics, art and people of that period of time. All in a very entertaining manner, that doesn't feel like a text book. It's the kind of story that will have you running to the library or internet to look up the lesser known paintings and sculptures that are mentioned throughout.

A Must for Art History Enthusiasts

Interested in the era of the French Impressionists? Want to see how that singular group of artists fits in with the rest of the world around them? This is the book for you. Most art history books neglect or severely limit the social expectations and political situations when outlining their own histories. I tend to believe this is potentially the largest mistake any such book can make. This volume goes straight for it, giving the reader quite a bit of information on the reign of Napoleon III and the politics of the Salon, but the personalities of the artists at the center of this story still come shining through in a way that makes them human. As a result, the art they produce will mean more, which is the entire point of a book like this. The 3 M's - Meissonier, Manet, and Monet - are the ones the story most revolves around, being the biggest names of the era, but others are included to lesser extents. This is not a full biography of any of these artists. Rather, this is about putting them in the context of their time and place.

Unless the reader has a photographic memory and all-encompassing knowledge of the works of this time, it's recommended that references such as Google Images or Wiki be harnessed. This isn't necessary for every chapter, but when the individual works are discussed as part of the context of the story, it will help to know what those paintings look like. I find it also helps to be able to look up the artists and their models, just to put a face to the name.

Its Not About Impressionism

I am certain that if an accurate title were given to this book few would purchase it. Still for what it is it is a good book. Just do not expect to learn anything about impressionism here.

The story I always wanted to read

Would you listen to The Judgment of Paris again? Why?

What was one of the most memorable moments of The Judgment of Paris?

The siege of Paris during the Franco-Prussian War,the Commune its horrors and aftermath.

I enjoyed every bit of the book.

A good mix of cultural and political history.

I teach art.
This was a good overview of the transition to impressionism.
I recommend it if you are interested in the topic.