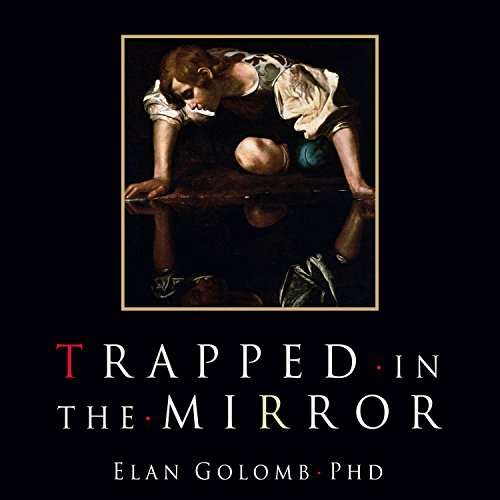 Trapped in the Mirror

By: Elan Golomb
Narrated by: Angela Brazil
Try for $0.00

The difficulties experienced by adult children of narcissists can manifest themselves in many ways - for example, physical self-loathing that takes the form of overeating, anorexia, or bulimia; a self-destructive streak that causes poor job performance and rocky personal relationships; or a struggle with the self that is perpetuated in the adult's interaction with his or her own children. These dilemmas are both common and correctable, Elan Golomb tells us.

With an empathic blend of scholarship and case studies, along with her own personal narrative of her fight for self, Dr. Golomb plumbs the depths of this problem, revealing its mysterious hold on the affairs of otherwise bright, aware, motivated, and worthy people.

Trapped in the Mirror explores:

What listeners say about Trapped in the Mirror

I've read several books on this topic but this one was not as helpful as I'd hoped. The author makes some great points but they are hidden in long meandering narratives. The book is full of weird stories and examples that I don't think most people can relate to. The Narcissistic Family is a better book on this topic. Dont let the fact that it says its written for clinicians scare you away, it's very accessible for those of us interested in learning more about our families of origin and their dysfunction.

Initially the narration took some getting used to... But once I was into the rhythm of the narrator, the content delivered was useful in many ways. There are certain instances where I did not agree with some of the generalizations made by the author, but there was also a balance of self awareness In the writer's approach, expressed as both experienced and fallible. The book includes Many hard stories from hard childhoods, and a comprehensive takeaway on how to approach recovering from narcissistic abuse. I recommend this book for anyone trying to break loose from dysfunctional relationships of any kind, and to those seeking external resources and insights into this world of narcissism and the tools to escape from a distorted reality.

I loved this book. It was recommended to me by my therapist, and I’m so glad she did. It was very eye opening, deeply personable and relatable. The narrators voice is very clear and soothing. I would recommend this book to those who may have a rocky relationship with their parents or spouses, and to the spouses/siblings of those who choose to read this book as it applies to them.

Probably the most useless book on the subject

First let's get it out of the way, the narration was fine. Now on to the train wreck that is this book.

When I first got the book, I heard a lot of people talking great things about it. I thought this might be something I can use. That was until I read through the second chapter and knew I was in for a bad ride.

First, the book isn't unbiased in its approach. The author obviously has some bad feelings for having a sucky childhood like the rest of us, but she takes it out in her book. She assumes all children of Narcissists become Narcissists, instead of addressing the issues people who grew up like that have to deal with.

She makes assumptions about what the narcissists themselves thought, and made some pretty big jumps in logic that I have read in other studies (peer-reviewed) said the opposite.

Part of the problem is this was obviously a focus and I think done in the 1970s. The jargon is from that far back, they don't mention any other factors and the fact she used obesity as a defense mechanism and was very body shaming about it, placed it as decades out of touch.

The book itself is recollections and stories of people who grew up in narcissistic families, many of them involved in the author's own life. During her chapters/interviews with her brother there was nothing unbiased or clinical, it was obviously some personal grudges happening.

Overall the book sucks. It isn't at all unbiased, it doesn't give you facts about the disorder, it doesn't even address coping mechanisms for people to use who grew up like that.

I really, really enjoyed this book. Very eye opening. My one and only gripe would be that I wish it gave a little more insight into how to fix, or change, the traits/feelings/etc that we have due to our narcissistic parents. She makes suggestions here and there, but being more straight forward would be helpful. Overall great book though. Worth reading!

What would have made Trapped in the Mirror better?

I have read many books related to emotional abuse and BPD lately, and I was actually quite excited to learn more about NPD. It may be that this book either wasn't relevant to my situation or, perhaps, it's too relevant and thus I was blinded. I found most of it to be a long whine and condemnation without regard to the cause of the NPD parent. Terms relating to narcissism are thrown out as denigrations left and right without any real exploration as to the cause - beyond essentially stating that "their parents were awful narcissists too!" The case studies were similarly boring and whiney, not to mention overlong. The author's explaining away of lesbianism at one point I found particularly off putting as if the book were written in the 19th century. All in all, I found the book unhelpful and not particularly informative, although I understand I'm in the minority

Would you ever listen to anything by Elan Golomb again?

I certainly would give her other works a chance. She is erudite to say the least.

Maybe it's just me, but the performance was one of the worst I've heard. It was completely unpalatable and absolutely added to the abrasiveness of the text, and, in the end, made me feel like I was being scolded for the entire presentation. The nervous mannerisms and cadence led me to believe that the narrator was far from a professional in the field. More practice and a conversational tone would certainly have improved the performance.

If you could play editor, what scene or scenes would you have cut from Trapped in the Mirror?

I would have trimmed all the case studies to the relevant points without all the derogatory accusations. I would have cut the section on lesbianism. I understand that perhaps in some cases it can be a reaction as described, but I thought she painted those portions with far too broad a brush - essentially saying "Lesbianism is usually a reaction to this bad thing or that bad thing."

I'm concerned that this book came highly recommended and I found it not helpful, informative or interesting. It makes me wonder if I would have gotten more from it by reading it in print.

I would recommend this book because of the excellent experience and insights of the author. It is an excellent look into the minds and hearts of the children of narcissists.

What does Angela Brazil bring to the story that you wouldn’t experience if you just read the book?

I love audio books in general because of my busy life. Angela's reading style is unique and I can understand how some might find it difficult but I did not. Angela's diction is excellent and her style of reading helped keep me focused on the content of the book. It helped me think through the word she was saying so that I can integrate the concepts into my life.

I'm listening to it a second time already after just finishing it. It is that important to me.

This book helped me understand the impact my mom’s narcissism had on me, and also how I inadvertently played out the legacy of narcissism while raising my daughter. It also had many helpful suggestions for changing my perspective and behavior going forward. Lots of good examples , some of which I related to. Five stars, in my opinion!!👍

Great narrator, excellent resource for those interested in or exposed to narcissistic behavior. It exposes some of the pitfalls of Western culture and it's tendency to promote and foster narcissism.

Give hope for those that have had dealings with narcissistic people. very good overview of this problem