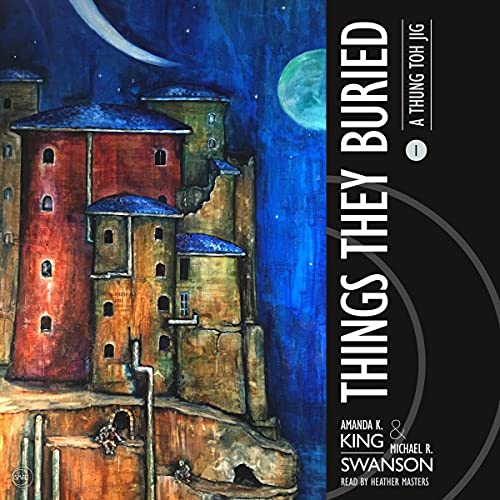 Under the dirty streets of Ismae's greatest port city, an old nightmare waits for Sylandair and Aliara, one that is stealing Dockhaven's children, one only they can end.

When the pair escaped their owner and abuser years ago, they left him behind in a ball of blue flame, but as more children disappear near the city's desalinization plant, their suspicions turn to the predator they believed dead. Accompanied by their less-than-reliable puka scout Schmalch, they delve into the forgotten depths of the patchwork city. Their search will lead to a twisting world of corruption and experimentation, uncover horrors greater than any they imagined, and summon memories they never wanted to exhume.

A dark science fantasy action adventure, Things They Buried is the first full-length novel of Ismae, a world where science sometimes appears as magic and history as myth, where monsters make themselves and heroes are wholly unintentional.

"...uses dazzling worldbuilding and a hodgepodge of characters, cultures, and fantastic species to tell a powerful, human story...The worldbuilding is nearly flawless in its execution, which will entice readers to immerse themselves in the story...The intriguing plot makes excellent use of its primary characters, resulting in a breathtaking, harmonious read. An empathetic, complex, and offbeat tale." (Kirkus Reviews - starred]

"The creepy threats and fierce fights in this densely imagined novel will gratify fans of dark fantasy, especially those who want real depth in between thrills." (BookLife)

What listeners say about Things They Buried