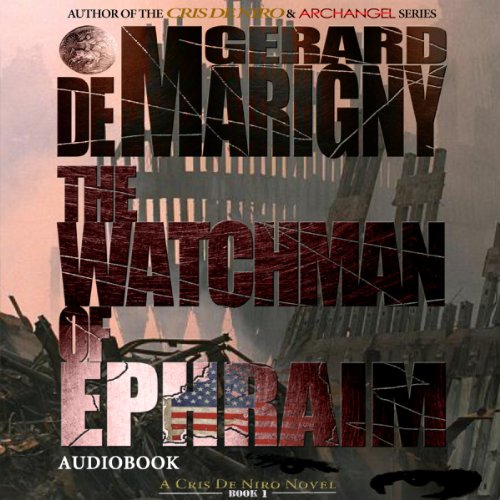 The Watchman of Ephraim

By: Gerard de Marigny
Narrated by: Elijah Alexander
Try for $0.00

Cris De Niro worked his way up to the top of the hedge fund world. Yet, all of his money couldn't protect him from losing his wife on 9/11. Ten years passed since the tragedy. De Niro and his sons relocated to a sprawling ranch near Las Vegas. Turning to his faith to overcome his anguish, De Niro now lives for a higher purpose. From a biblical passage, he reads about the "Watchman of Ephraim", a defender who kept watch over the land. De Niro decides to acquire a lackluster counter-terrorism agency in order to transform it into a modern-day version of The Watchman for the United States but there's not a moment to lose.

Aref Sami Zamani is planning a terrorist attack on American soil - codenamed "Antioch", a plot to detonate a nuke over the city of Las Vegas. The Watchman uncovers a connection between Zamani and a Mexican drug cartel but their agent goes missing before they can learn more. That's because Zamani has a spy working for The Watchman.

Strange events start to unfold near the Nogales border crossing. References are discovered to something the Mexicans are calling "Noche Del Espantada"...“Fright Night", but can it mean something else?

September 11, 2011 and the sun hasn't risen yet in Las Vegas or Nogales. Antioch is in motion! At the border, Noche Del Espantada has begun and there are intruders at De Niro's ranch. De Niro has to protect his sons and someone new in his life, Dr. Moriah Stevens. She too, lost her spouse on 9/11. Moriah finds herself in love with De Niro but his devotion to his wife is proving too powerful for him, even after 10 years.

It's the 10th anniversary of the worst terrorist attack on American soil and unless De Niro and his new team are successful, the day will be known as "The 2nd 9/11".

What listeners say about The Watchman of Ephraim

This is the first is a series of action adventure books about a group called The Watchman Of Ephraim based on a Bible verse that describes those who watch over the land. Cris De Niro was a high powered head of a major hedge fund until he lost his wife and unborn son in the attack on the Twin Towers on 9/11. It was after this event that he bought a group of experts together to create a super counter-terrorism agency.

Their first encounter involves a planned nuke attack over Las Vegas. Iranians, Mexicans and Russians are all involved. Strange gatherings of many people on the Mexican boarder alert the team to possible trouble, but they had to act fast to protect the country and De Niro's remaining family.

I really liked the theme and action of this story. The idea of legal justice and/or moral justice was interesting. Reminds me of some other TV shows and books that follow along this same theme which always conflicts me, but never looses my interest. I listened to the audio which added a lot to the emotions evoked with this story.

Much better than I thought it would be

I liked the story. I liked the characters. And I liked the Watchman group they set up. Quite a bit actually, much to my surprise. I'll be getting the sequel right now if that tells you anything.

The reader was good and you never wonder which character you are listening to.

Where does The Watchman of Ephraim rank among all the audiobooks you’ve listened to so far?

It is near the top since the plot is so good and the characters are well liked.

What was one of the most memorable moments of The Watchman of Ephraim?

When Cris and Mugsy take over the counter-terrorism agency and what happens on the first day.

Exciting when needed to be and the voice is pleasing to the ears.

When you read what happens to Cris' wife, that is emotional and will get to you everytime.

Get this audiobook and you will not be disappointed. The whole series is great and we need more of the books to be made into Audiobooks.