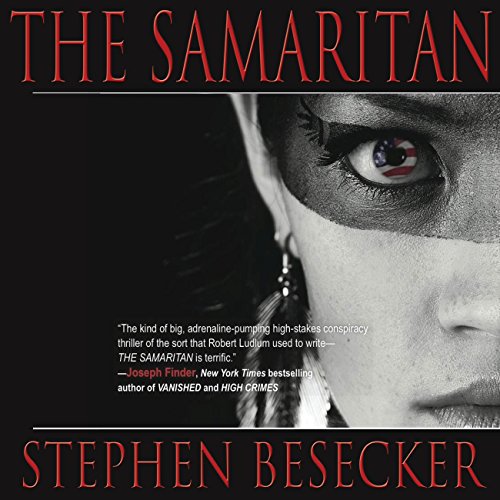 By: Stephen Besecker
Narrated by: Bill Lord
Try for $0.00

After a youth marked by the death of his parents and a childhood spent with his shaman grandfather on the Cattaraugus Indian Reservation, Kevin "Hatch" Easter has found a job he believes in - tracker for the CIA - and a wife, Karen, he cherishes. But his life is shattered on a hot August night in New York City when a mob collection gone wrong leaves three people dead, Karen Easter among them.

Just a few days later, police find the gunman dead, the murder weapon on him, and the criminal case is all but closed. Except someone doesn't buy it. Someone thinks the guilty parties are still out there. And that someone wants revenge.

Now, a highly professional hunter stalks the streets of New York City, taking out anyone who may have had a hand in the murders. Is Kevin Easter the hunter? And if he is, is it the CIA's job to save him - or to kill him?

The Samaritan is a chilling, pulse-pounding novel - a powerful story of love, death, and the terrible repercussions of both.

What listeners say about The Samaritan

I really liked Kevin Easter but I would have to say I think my favorite character is "the Hunter". He has a story and a reason for doing what he is doing. No spoilers here you just have to listen yourself.

Yes, when the three innocent people became collateral damage, one of them being Karen Easter. That scene just seemed to much like real headline news.

I was a little skeptical about buying this book as the first reviews I had read when it first came out were not very positive. However, I did keep the book in my wish list and every time I had nothing to read/listen to I would revisit this one. So, I finally bought it and so glad I did. Please ignore any negative feedback about the book. It is light, easy to listen to, coherent and well told. All around a pretty good book and I hope the beginning of a new series. Either way, I will look forward to more from this author. I recommend this book. If you find this review helpful please indicate so. I base many of my own purchases on reviews and always let reviewers know I appreciate their opinion.

If you could sum up The Samaritan in three words, what would they be?

This is a great thriller that grips the listeners from the moment the mob enters the tavern. Although at times the action seems impossible , the suspenseful story line is fast-paced with a nod to the movie Die Hard, but also contains strong twists.

The Samaritan is a complex story touching themes of love, loss, family, revenge, and moral right, wrong, and shades in between. A commission of a crime goes horribly wrong, resulting in the death of some innocents, and the flow on affects of the tragedy, on all sides of the crime. Initially I started with a feeling of just who was right, and who was wrong, but as the story progressed, the line became more muddied, and many perspectives were thoughtfully covered. There were criminals, corrupt law enforcement, law enforcement acting officially sanctioned corruption "for the greater good", and just everyday people. A great portion of the story was a cat and mouse chase to an aggrieved citizen taking revenge on those he felt responsible, and "who" the person was was cleverly played out, but not with silly contrived red herrings. The story all wrapped up to a satisfying conclusion.

The narration was fantastic, with different voices conveyed distinctly. The narrator also took the initiative of adding some good sound effect embellishments at a few points in the story, and I felt this added nicely to the presentation.

I look forward to more titles by both the author and the narrator. Highly recommended

This book passed my expectations,I really enjoyed it.The narrator did a fine job with the voices.The story was full of twists.It was great!

Great twists and turns and a fabulous narrator!

Would you listen to The Samaritan again? Why?

I would totally listen to The Samaritan again. It was engaging and exciting, and I did not figure out "who-done-it" until it was revealed (which I usually do). However... I'm going to look for another Bill Lord book to listen to instead!

Bill Lord was magnificent!! He brings each character to life... to an extent that I can picture each one of them in my head. I like to listen while i'm at the gym, and not once did I think about my aching muscles while listening. Bill has such a pleasant tone to his voice that I thoroughly enjoyed every minute.

Great story, fantastic narrator! I tried another book after this one and couldn't even make it past the 3rd chapter. Guess I need another Bill Lord book. :)

Cool characters with lots of action!

Well developed characters and story that keeps you guessing. I'd love to read a sequel that takes up where the epilogue leaves off!

Twists, Turns, and an Unexpected Finish!

What made the experience of listening to The Samaritan the most enjoyable?

Aside from the story being really interesting, the narrator brought each character to life. When I read words on a page, I don't necessarily "see" the characters in my head. Bill Lord painted a vivid picture of each one of them. By the time I got to the final twist in this compelling plat, I felt as though each character had walked into my own living room to tell me their own story.

What other book might you compare The Samaritan to and why?

I'd compare it to Ludlum's Bourne series. I understand that a sequel to this book is being published. I can't wait to read it! I hope that Kevin Easter will become a regular on my audio bookshelf.

Have you listened to any of Bill Lord’s other performances before? How does this one compare?

I've listened to a couple of other performances by Bill Lord. This is the best yet, not only because of the great material he had to work with, but also because he truly developed each character and carried them through to the end. I don't want to give away any plot secrets, but...expect the unexpected!

And The Earth Shall Weep

I hear that there's going to be a sequel - I can't wait to listen to it. I hope Bill Lord will bring Kevin Easter to life again in the next story!

*Review* A Modern Suspense Thriller With a Twist

This is a suspense, thriller, CIA kind of book that I have been looking for. Someone has killed two women and Hatch is going to try to find out who and why.

Teaming up with his brother and following the clues as well as the additional crimes, this book twists and turns and keeps you guessing. I am going to recommend this book with the caveat that it is not the normal kind of Special Forces operates that I usually listen to. This has nothing to do with Middle East terrorist or protecting someone of prominence. That is not a bad thing.

The narrator, Bill Lord, wonderful. A solid performance all around. There were many male characters and after a few moments, I could figure out who was speaking by the narrators tone.

Credit worthy and or $: I would probably not use a credit on this book simply because of the length. *I was fortunate enough to be asked to give my thoughts and review in exchange for a copy of this book.* My rule about length is that to use a credit it has to be over 7 hours.

I'm glad to have this book in my library and anyone who wants thriller that is made up of the aforementioned themes. This has a great twist and it happens all within one city or state.

If you found this review helpful please take a moment to mark yes immediately below this text. Thank you!

What did you love best about The Samaritan?

Kept me guessing. How interesting, a thriller for surely this was a love story, a mob story, a murder, a mystery, something for everyone. Very interesting.

I never thought I would sympathize with the mob

Let me admit that this type of novel is not what I usually read but I was intrigued by the synopsis and gave it a shot. And hey, I enjoyed thriller.
Let's start with the story: ever want to know what every character good or bad thought and it felt about their current circumstance? Than this book is for you. Seriously, the amount of characters and the development of each of them is astounding. I never thought I would sympathize with the mob and general under world. But this book did just that.


Now the narrator, Bill Lord, was very skilled at bringing all of these characters to life. The numerous amounts of vocal dialects were spot on but it was his easy listening, general narrator voice that got me hooked. I'll be looking for more of his work.

This book was given to me for an honest review.