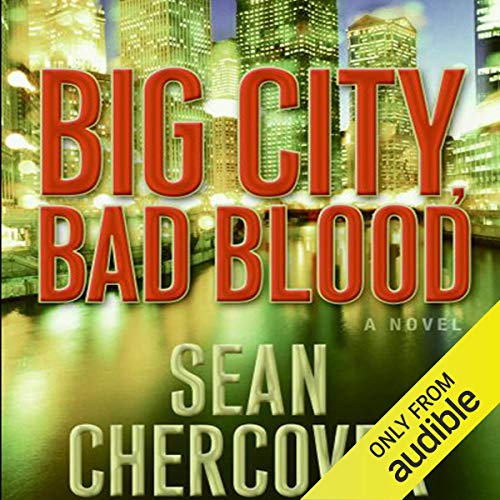 By: Sean Chercover
Narrated by: Joe Barrett
Try for $0.00

Disillusioned newspaper reporter-turned-private detective Ray Dudgeon doesn't want to save the world; he just wants to do an honest job well. But when doing an honest job threatens society's most powerful and corrupt, Ray's odds of survival make for a sucker's bet.

A simple bodyguard job for a Hollywood locations manager uncovers a rat's nest of sexual blackmail, murder, and high-level political corruption...and Ray Dudgeon is caught in a war between the FBI, the Chicago police, and the mob. With the line between good and bad blurring, Ray doesn't know who he can trust - or if he can even trust himself.

"The author's considerable storytelling and characterization gifts compare favorably with those of Loren D. Estleman and other established masters of the crime genre." (Publishers Weekly)

This is a very "noir" crime novel, as in the likes of Dashiell Hammett. Ray is a deeply flawed, very violent man, with a penchant for introspection. The character is drawn with exquisite detail. So is the city of Chicago in which it takes place.

The plot hums along at a most satisfactory pace. The narrator is superb. My one nit is his mispronunciation of the street name Armitage!

This award-winning novel is a must for all Chicagoans, and for devotees of crime fiction everywhere.

I wonder why Audible hasn't given it more visibility.

The story was engaging enough that I wanted to keep listening tho it was not too difficult to figure out how it would end. I love the Chicago setting. It seems so many detective stories take place in NYC or LA and I liked this one being closer to home and in a city I knew.
The narrator was terrific except for one thing....his British accent is godawful. The "girlfriend" is supposed to be British but every time her character spoke she sounded exactly like the Geico gecko and I'd start laughing. But she was never a humorous character so the laughing spoiled the mood. And to me it sounded more like a really bad Aussie accent than
British as well. But his other characters were great so I had to try to overlook the absurdity of her accent. But truly.....all I could see was that silly gecko in the commercials.

Joe Barrett's note-perfect performance and Sean Chercover's skilled evocation of Chicago (and Hollywood) were my favorite aspects of this solid detective novel. Dudgeon's a good character and the story dances around some clichés of the genre while effectively utilizing others. There's nothing startling original here but if you're in the mood for a hard-boiled detective story, Big City, Bad Blood delivers.

Great listen. love the author and the narrator. Full of Chicago color and good characterizations. Will definitely listen to any other books by Chercover.

Enjoyable &amp; very up to date

I really enjoyed this book (except for the getting beat up part). The author was up to date &amp; this was refreshing. The story line was intriguing too. I recommend others read it.

What did you love best about Big City, Bad Blood?

I love the character developement, the title character is great with all his strengths and weaknesses

Have you listened to any of Joe Barrett’s other performances before? How does this one compare?

I have not but will look for him in the future

This is typing, not writing, as Truman Capote (or was it Gore Vidal?) once said. The reader is very good, and I have enjoyed many of his other audiobooks, but Sean Chercover is another in a very long line of private investigators who believe they can write. Along with like-minded attorneys, this group has multiplied, due to the demand for good work in the area, and at some point they should be quietly extinguished (nothing violent, you understand). Tim Hallinan, John Grisham and John Lescroarts have nothing to worry about. Their work bears no resemblance to this trash. Save your money and your time. Listen to these three guys, in the case of Grisham the early work, and forget about Mr. Chercover. He should retire again.

The plot hums along at a most satisfactory pace. The narrator is superb. My one nit is his mispronunciation of the street name Armitage!

This award-winning novel is a must for all Chicagoans, and for devotees of crime fiction everywhere.

I wonder why Audible hasn't given it more visibility.

Ray Dungeon is a P.I. In the Sam Spade Style

Gritty P.I. Ray Dungeon finds Chicago too small for him and the 'outfit.' He takes a job as bodyguard for a mid-level LA production manager who has been threatened with death by the 'outfit' for seeing a hit and seeing a top City Official in the car. Dungeon lives in his head a lot so he is always talking to himself about issues, did it really happen, will Jill answer his calls. It is a very well written story about an investigator with morals. He has friends on the CPD (Chicago Police Department) but not too close of friends. You learn about his childhood bad boy friend, his grandfather, and his past life as a Chronicle reporter. It is a well written book and leaves you thinking that Ray will survive. There is one more book.

Joe Barrett is an excellent narrator for this gritty P.I. He made the story pop to life. The torture scene, only one, was vividly alive.

Ray Dudgeon's biggest strength is his willingness to take action. Half the time he can't see a safe way through, but he barrels through nonetheless. I can admire that.

The performance was spot on: world weary, a sense of the ironic, and understated. The Chicago accents were faultless and subtle.